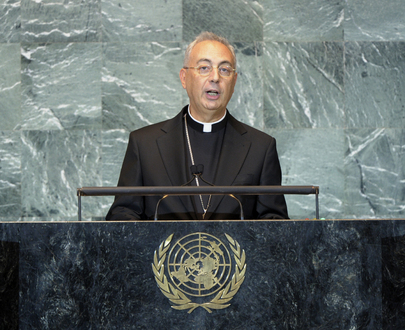 DOMINIQUE MAMBERTI, Secretary for Relations with States of the observer delegation of the Holy See, said certain areas, such as the Horn of Africa, faced serious humanitarian emergencies that plunged millions into drought and malnutrition. Those emergencies underscored the need to find innovative ways to implement principles, such as the responsibility to protect. There should also be a deep search for a way to handle and manage conflicts through constructive dialogue. Military action should be a last resort under the responsibility to protect, and that principle should prompt a search for solutions to those crises. It was important for the responsibility to protect to motivate the work of the United Nations and all countries. Unfortunately, there were numerous situations in which religious freedom was limited or denied, he said. Christians suffered the most persecution worldwide because of their faith, and a joint commitment to promote the religious freedom of each individual of each religion was important, with measures for secure lives for minorities and those of all faiths and beliefs. There were countries that promoted great pluralism and tolerance but perceived religion as destabilizing and marginalized. Yet, the sincere search for God had brought larger respect for the dignity of man. The global financial crisis was caused by lack of ethics in certain structures, he continued. Economies did not work merely for market self-preservation – there had to be an ethical reason for being, if economies were going to work for mankind. Each economic decision had a moral consequence, and the world community must be able to reduce poverty and lighten the suffering of those who had the least. Therefore, a clear-sighted review of distortions of the economic system was needed, and a new model was necessary. It must serve the family of nations and a family was, by its nature, community based, with mutual trust and attention to the weakest and most disenfranchised. The international community should also concern itself with an effective and applicable Arms Trade Treaty, he said. The goal should not be merely regulating trade and creating obstacles to illegal markets, but also creating respect for human life. Courageous decisions also needed to be made for the right of Palestinians to have their own sovereign State and the right of Israel to have security. The Holy See urged both parties to return to negotiations with determination and resolve, issuing a call to the international community to help foster lasting peace between Israel and Palestine.