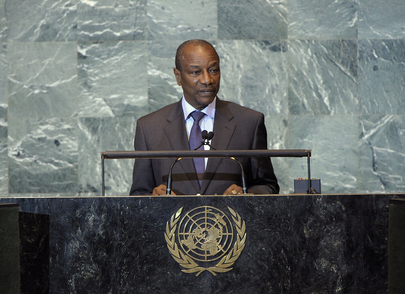 ALPHA CONDÉ, President of Guinea, said he was honoured to address the Assembly as the first democratically elected leader of his country since independence, an event that marked its return to the international stage. As Guinea turned an important page in its history, his Government was committed to furthering respect for human rights, consolidating national unity, building a democratic society and extending progress and prosperity to all Guineans, he said. Yet, that effort was filled with many challenges, since the State he had inherited was completely dysfunctional and the economy had collapsed.

The day after elections, the Government had committed to a series of real actions to rebuild the economy, he recalled. Among the reforms undertaken, those aimed at achieving food security and reinforcing the agricultural sector were critically important. The mining sector was being improved through a new code that addressed Guinea’s needs, as well as those of its partners. Meanwhile, the legal system was being reformed, and changes were also under way in the financial and economic sectors, including efforts to curb corruption and prevent misconduct.

The Government had also drawn up strategies to reduce poverty and boost access to basic services, he said, highlighting health care, education and the environment as top priorities. Guinea was negotiating with the Bretton Woods institutions to sign a public-private partnership agreement to free the country from debt, he said, acknowledging the support of IMF, the World Bank and the African Development Bank.

Describing national reconciliation as the “cornerstone of State action”, he reported that a provisional commission co-chaired by the Grand Imam and the Archbishop of Conakry had been established to work with regional “wise men” on ways to reinforce national cohesion and achieve true reconciliation. Guinea was also working to reform the military, and to correct the electoral irregularities that had occurred during the recent elections, he added.

Touching on other issues, he said the Palestinian people must be allowed to exercise their right to self-determination, which was the only way to achieve genuine peace with Israel. He hailed the new-found stability in Côte d’Ivoire and welcomed South Sudan as the newest Member State of the United Nations. He also stressed that the international community must provide aid and support to those suffering the dramatic humanitarian catastrophe unfolding in the Horn of Africa. He further condemned trafficking in drugs, as well as in small arms and light weapons, which was ruining West African economies and tearing the social fabric in the subregion.