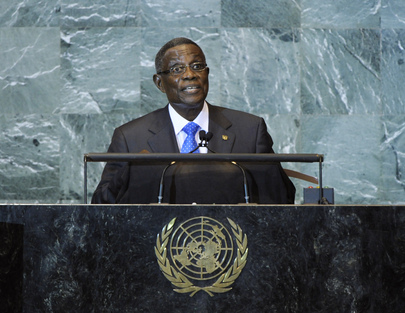 JOHN EVANS ATTA MILLS, President of Ghana, noting the increasing complexity of peacekeeping and his country’s extensive contributions to the effort, reaffirmed his support for the ongoing reform agenda undertaken by the United Nations in consultation with troop-and police-contributing countries. He pledged that, as long as financial, material and human capacity existed at the national level, his country would continue its support in that area. In order to equitably share the burden, however, it was important that personnel-contributing countries be financially supported by donor countries in a timely manner, while recognizing the financial constraints on all States. He paid tribute to the United Nations personnel from Ghana and other countries who made the ultimate sacrifice in the past year for the maintenance of international peace and security.

Noting progress in the development of an arms trade treaty, he said he considered it indispensable in preventing the flow of conventional arms to destinations where they were likely to wreak havoc, particularly developing countries. It was imperative that the remaining preparatory committee meetings come out with proposals toward a treaty that closed any loopholes of the illicit trade in such arms. Turning to gender issues, he said it was critical to erase stereotypes, affirming that his country remained focused on that, as well as on improving living conditions of women and girls. He expected the objectives of the United Nations Entity for Gender Equality and the Empowerment of Women (UN Women) to be met.

On the tenth anniversary of the Durban Declaration, he expressed hope that the implementation of the outcome document would ensure the enjoyment of human rights for all. Welcoming the focus this year on non-communicable diseases, he noted efforts to improve his country’s health-care system, which included work on infrastructure nationwide, scaling up of a national ambulance service, training of emergency personnel and improvement at the policy level. Welcoming also international focus on the International Year of Youth, he said his country was implementing a policy to situate young men and women in the centre of nation building, expanding education opportunities, providing free school uniforms and text books and turning over 1,000 “schools under trees” into brick and mortar structures. He added that the country’s gas and oil finds would provide greater employment opportunities, and that the fight against the menaces of the illicit drug trade must continue.

Turning to climate change, he said that there was a need for urgent and concerted action to maximize the opportunities presented by the phenomenon, with the right investment in infrastructure, institutions and technology by the international community and States. He hoped that the critical questions that the Cancun Conference did not answer would be addressed in Durban. Political commitment, strong leadership and flexibility were needed to ensure a mitigation regime was achieved. Pledged commitments should be quantified, monitored and verified. Sources of funding for the Green Climate Fund must be determined for that purpose, and the parties of the United Nations Framework Convention on Climate Change (UNFCCC) must be empowered to have more authority over climate funds.

On the political and security fronts, he welcomed the shift in emphasis from national security to human security, for which his country was making legal and operational reforms to support. It was also committed to implementing the global norm of the responsibility to protect. Noting that presidential and parliamentary elections were scheduled in his country a year from now, he said measures had been put in place that would ensure peaceful, free and fair polls. “ Ghana’s democratic credentials stand tall, and we intend to keep it that way”, he said, reaffirming his country’s fullest commitment to the ideals of the United Nations.