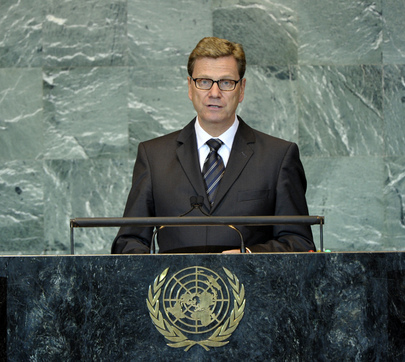 GUIDO WESTERWELLE, Minister for Foreign Affairs of Germany, said that “globalization” meant so much more than economic integration. Today, the world was witnessing a “globalization of values”, namely, those enshrined in the United Nations Charter and the Universal Declaration of Human Rights. It had been demonstrated in North Africa and the Middle East, as well as in Belarus, where people longed for an end to repression and tyranny. With the fall of the Berlin wall more than 20 years ago, he said, Germany had experienced for itself the joy of peaceful revolution; it, therefore, had a fundamental interest in the success of the political awakenings in the southern Mediterranean. Germany offered its support, above all, in the crucial process of building a new social and economic order. “For we all know that the success of social change largely hinges on economic success,” he added.

Germany was, therefore, not only working towards close partnership, but also market access and increased trade, he said. It would offer young people education and training so that they could make the most of their opportunities. Turning to the situation in Syria, he said that the courageous men and women of that country also deserved a clear signal of solidarity. The Syrian Government had responded to the legitimate demands of the people with “brutal force”, he stressed. Germany would continue to press for a Security Council resolution on the matter, which was not just about showing solidarity with the Syrian people — it was about the international community’s credibility.

His country backed a two-state solution to the Middle East conflict, with the creation of a State where Palestinians could live in dignity and self-determination, which was independent, sovereign, contiguous, democratic and politically and economically viable. Germany had been involved in the very practical development of the State, in building administration and vocational training, as well as politically through the German-Palestinian Steering Committee. Nonetheless, he said, Israel’s security was also one of the “fundamental principles” that guided Germany. The statement issued by the Quartet last week identified the milestones along the way; Germany had worked hard for that statement and staunchly supported it. Moreover, the recent confrontation of words must not be allowed to lead to an escalation of violence in the Middle East. He called on the parties to make use of the impetus provided by the intensive efforts in New York for the benefit of both peoples.

On 5 December in Bonn, Germany, under Afghan chairmanship, the international community would discuss the way forward in Afghanistan. That conference, he said, would focus on three major issues: the complete handover of responsibility for security by 2014; the continued engagement of the international community after 2014; and Afghanistan’s internal reconciliation and support from States in the region, which was a key to lasting peace. Meanwhile, he added, millions of people in the Horn of Africa were struggling to survive. The United Nations had played a valuable role in providing swift humanitarian assistance. Germany was doing everything in its power there, and in many other crises, to alleviate suffering.

Further, Germany would continue to be “in the vanguard of the fight against climate change”. Like disarmament and nuclear non-proliferation, as well as the protection of human rights, the fight against climate change was an integral element of preventive diplomacy. It was part of a far-sighted peace policy. He added that the United Nations must adapt to that changing world. Only then would decisions made there gain political force, effectiveness and acceptance. The last General Assembly had considered United Nations reform, but no real progress had been made. He, therefore, welcomed the decision of the body’s current President to again champion that reform.