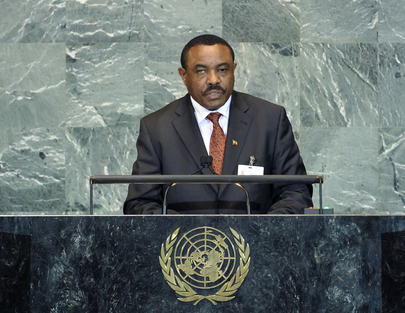 HAILEMARIAM DESALEGNE, Deputy Prime Minister and Minister of Foreign Affairs of Ethiopia, said that the globalizing world had presented challenges to Africa and the developing world, and that negative developments over the last few years had made it even more difficult for such countries to move along the path to development. There was a need for a redoubled effort, so that achievements of the Millennium Development Goals would not be frustrated. For its part, Ethiopia felt that it was on track on almost all targets, and its commitment was even more ambitious in line with its five year Growth and Transformation Plan. Yet, the global economic situation remained a source of concern.

It was in that context that the Horn of Africa had been hit by the worst climactic crisis in 60 years, he said. At the current “critical juncture”, the international community should be galvanized, particularly in assisting to alleviate the crisis in Somalia. The call made to that effect at the recent Mini-Summit needed to be reiterated and amplified. What was even more crucial in the region, however, was sustainable development. Poverty, on top of denying people their human rights, was not a solid foundation on which to build peace and security. Additionally, the Intergovernmental Authority for Development (IGAD) region faced the challenge of climate change, adverse effects of which were becoming evident in a variety of ways. Moreover, that issue embodied injustice, as Africa and the developing world were the worst affected, while contributing the least to climate change.

Members of IGAD had been trying to bring its efforts to bear, realizing that one major challenge hindering development in the region was related to security and the lack of durable sustainability. They were working to implement infrastructure projects and to strengthen their common endeavours for peace and security. In Somalia, in close collaboration with the East African Community, the African Union and the United Nations, IGAD had been the “linchpin” in the effort to assist the Somali people. Now, with the extremist Al-Shabaab group having been driven out of Mogadishu and the “tide turning against them”, there was new hope in Somalia, which should be sustained. He paid special tribute to Uganda and Burundi for the sacrifices they had made in the course of that progress, and underlined that the fight had humanitarian and developmental implications, not only security or political.

In that respect, he recalled that IGAD countries had requested the Security Council to support them in their efforts for peace in Somalia, and to contain those who not only encouraged, but took part in terrorism. It was particularly vital for the Council to act on the conclusions and recommendations of a body it had established itself, he stressed. “Sweet talk, devoid of any behavioural change in practice and on the ground, should not lead the Security Council to wish away concrete evidence,” he said, adding that there should be no “double standard” in the fight against terrorism. Efforts against terrorism could not succeed if they were selective.

Ethiopia continued to call for the reform of the Security Council and the revitalization of the General Assembly, the true representative of the people of the world. In the same spirit, Ethiopia believed in the need for peaceful negotiations and mutual accommodation from the parties to the Arab-Israeli conflict. It was not enough that the right of the Palestinians to a viable State be acknowledged or given lip-service, he stressed. Real, tangible and practical steps must be taken. Noting that the world was passing through a period of uncertainty, he added that such periods needed to be “handled delicately”. Therefore, more attention needed to be paid to the prevention of conflicts and mediation.