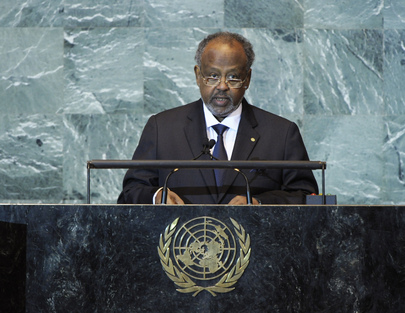 ISMAIL OMAR GUELLEH, President of Djibouti, reaffirmed his country’s commitments to the ideals of the United Nations Charter and to the advancement of women. He appealed, in the context of the current economic crisis, for the alleviation of the growing burden of debt on the least developed countries and the facilitation of trade and other measures in their favour. Noting the devastation of natural disasters on developing countries, particularly in his region, he called for a concerted increase in mitigation measures. Faced with the terrible scourge of global warming and the endemic drought that beset his region, he said emergency measures alone could not avert calamity. Thanking donors for aid and noting the efforts of the countries of the region, he nevertheless said that large-scale water and food security projects were needed.

Somalia, he said, faced the worst of the drought, as well as still dealing with its long-term political insecurity. He noted, however, that he was able to visit Mogadishu recently after the withdrawal of Al-Shabaab. The fragile peace that ensued was an opportunity to rebuild the country and to consolidate lasting stability, with a transition to permanent governance next year. He stressed that all efforts to end the endless infighting within the transitional authorities were welcomed, including the new roadmap to ending the transition. The international community should provide necessary resources for that purpose and the authorities should show leadership and commitment toward that end.

With all of its neighbours having been involved in conflict, he said his country had attempted to maintain peace, but in June 2008, he said it was dragged into a border conflict with Eritrea. Since that time and despite Security Council resolutions, Eritrea refused to provide any knowledge of 19 Djiboutian prisoners of war, continuing a grave source of concern for his country. Despite that country’s defiance of those resolutions, he was convinced that mediation was the only way to achieve a lasting peace. For that reason, he welcomed the efforts of the Emir of Qatar to station troops in the conflicted areas, leading to the withdrawal of Eritrean troops from the areas that they occupied.

“We will never stop believing in the virtues of dialogue and mediation,” he said, noting that such activity had recently borne fruit in the birth of South Sudan, which he welcomed to the region. He contrasted that event with the situation of Palestinians, which he said continued to live under occupation that he called unsustainable, and likened it to the situation that his country had fought against in its own case. The time had come, he maintained, to give hope to Palestinians by recognizing them as a full-fledged State. History would remember this session if their hopes were allowed to come to fruition.