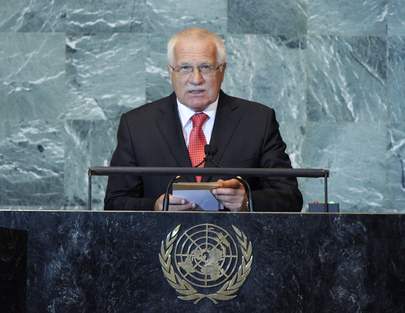 VÁCLAV KLAUS, President of Czech Republic, said that 19 years ago, the dissolution of Czechoslovakia was negotiated peacefully without the need for external mediation. That experience showed that a lasting, acceptable solution to a country’s aspirations for sovereignty and freedom, or to a dispute among countries, must primarily come from within its region and from negotiations among the countries concerned. In that spirit, he was convinced both Israel and Palestine must work together to find a way forward to end their dispute; there was no shortcut. Both sides must take an innovative approach and overcome old, inflexible and rigid ways of thinking to negotiate a balanced, enduring solution. That solution could not come from unilateral steps or steps imposed by the United Nations.

Based on its experience of successfully completing the transition from communism to democracy, the Czech Republic hoped that the countries of North Africa could make progress in the same direction, he said. Removing several leading politicians was not the crucial moment of the much needed systemic change. Instead, three pre-conditions were needed: a clear and transparent concept of where to go; a feasible strategy of how to get there; and the ability to motivate citizens of the countries concerned to promote it. “I still do not see these pre-conditions in some of the countries of Northern Africa,” he said. “Systemic change cannot be agreed upon or pre-arranged at international conferences; it cannot be mediated or passively ‘acquired’ as foreign investment.” Rather, systemic change was a domestic task and a series of policies. Still, other nations should bolster cooperation with North Africa. The European Union should foster free trade with it. Prosperity in North Africa guaranteed its stability and was a pre-condition for preventing growing migration to Southern and Western Europe.

He supported the further development of nuclear energy and lauded the Secretary-General’s decision to hold a meeting on nuclear energy and security. The main lesson from the nuclear catastrophe in Japan in March was that even coastal locations that were seismically stable for urban planning could be affected by earthquakes far below the sea. Therefore, nuclear power plants should be built on locations least prone to damage by natural disasters. Countries should not be deterred or discouraged from building nuclear power plants. “Nuclear power is a stable, legitimate and — in some countries — an irreplaceable source of energy today,” he said.

He supported the “much-needed” Security Council reform. The world had changed considerably since the Charter was signed. New countries must have more responsibility in the Organization and for its financing. The Czech Republic was the current President of the Executive Board of the United Nations Development Programme (UNDP). While supporting UNDP, he said that, in order for developing countries to develop, all unnecessary barriers, standards, regulations and other constraints in the developed world must be removed first. He also supported the non-proliferation and disarmament agenda of the Comprehensive Convention on International Terrorism.