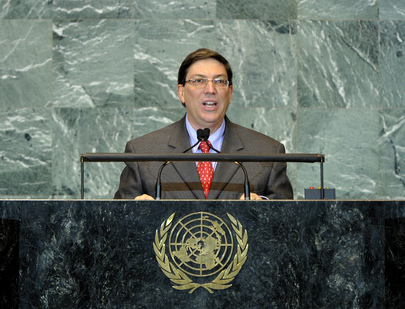 BRUNO RODRÍGUEZ PARRILLA, Minister for Foreign Affairs of Cuba, said that while delegations were deliberating in New York, yet another “preventive war” was taking place; this time in Libya under the pretext of protecting civilians. The United States and the North Atlantic Treaty Organization (NATO), purportedly to “avoid a massacre”, had launched a military attack against a sovereign nation that posed no threat to international peace and security. Indeed, a “regime changer” operation had been unleashed as NATO had imposed on the Security Council a “dubious” resolution “authorizing Member States […] to take all measures necessary to protect civilians and populated areas under threat of attack”. Subsequently, NATO had violated that same text in order to supply weapons and money to one of the parties in the Libyan conflict, as well as to deploy operatives and diplomatic personnel on the ground.

“Now everybody has a better understanding of the responsibility to protect and exactly what it can be used for,” he declared, stressing that the war in Libya was being waged with the most advanced and lethal military technologies. Moreover, communications and media outlets were profiting from the war and reconstruction operations. Early on, Commander in Chief Castro had warned the world about NATO’s aims. Since then, Cuba had actively engaged in the matter — not to defend a Government, but to defend a principle. The “assassination” of thousands of innocent people under the guise of civilian protection was absolutely unacceptable. Only the Libyan people could decide the destiny of their own country.

Continuing, he said that the military intervention in Libya and “the growing threat” against Syria amounted to opportunistic actions taken by the United States and Europe in response to the collapse of their own system of “domination and plunder” in North Africa and the Middle East. As those regions were undergoing genuinely home-grown popular movements, the United States and Europe were aiming to secure huge reserves of oil and water, and to confiscate financial assets in times of economic and social crises. “It is the task of the General Assembly to exercise its powers to prevent military aggression against Syria,” he said, reminding delegations that Washington had “cynically and nefariously” rushed to describe what had occurred in Libya as a “new model”.

He noted that United States President Obama had made a cynical statement to the Assembly last week, which said as much, and there was no doubt that Latin America and the Caribbean could be included in the aggressive regime-change attitude that was taking hold. Among other questions he posed, he asked if the European Union could say something about that. In the face of such mounting threats, “more than ever before, we must defend the United Nations”, and turn it into an organization that served the legitimate interests of all States, and not just the major Powers. “We must see to it that international law and the purposes and principles of the [United Nations] Charter prevail in the face of brute force attempts to wipe them out,” he said, adding in that regard that it was absolutely necessary to re-establish the leading role of the General Assembly and totally “re-launch” the Security Council.

As for bilateral relations with the United States, he said the Cuban Government reiterated its willingness and interest to move towards the normalization of such relations. He also reiterated his Government’s proposal to begin dialogue towards resolving bilateral problems, including humanitarian issues and several cooperation agreements on combating drug trafficking, terrorism and people smuggling. Meanwhile, the economic and financial blockade against Cuba had been tightening and attempts to subvert Cuban constitutional order were rampant. Moreover, right-wing extremists and the Cuban-American mafia continued to subvert the minimal steps taken by the United States Government that to some extent had favoured the links between Cuban émigrés and their home country. The Cuban President had reiterated that he would continue to change, in a sovereign way, all that needed to be changed, so that Cuba’s economy was more efficient and its socialist system operated better.