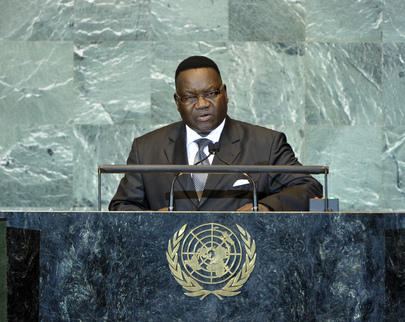 ANTOINE GAMBI, Minister for Foreign Affairs of the Central African Republic, said his country welcomed the entry of the “new brother and neighbour State” of South Sudan as the 193rd Member of the United Nations. South Sudan had placed deliberations at the very heart of the problems that were of current concern to the international community, namely the peaceful settlement of disputes. These continued to be the core work of the organization, and mediation was an indispensable tool in that regard.

He said the international community faced many challenges, and it was necessary to present adapted responses to them in order to bring about a better world. Protecting the environment and mitigating climate change was an important priority for the international community. In commemorating the twentieth anniversary of the Earth Summit, the focus was on forests. Tropical forests such as those in the Central African Republic faced many threats having to do with social problems and natural disasters. The drought currently afflicting the Horn of Africa, where approximately 12 million human lives were threatened, was a source of major concern and required broad mobilization from the international community. Food shortages must also be urgently addressed.

He said nuclear non-proliferation remained a priority, and welcomed the interest of the international community in disarmament, as the threat of nuclear peril affected all humankind. All those States possessing nuclear weapons must shoulder their responsibilities to bring about nuclear disarmament, and the Central African Republic would support any initiative of the United Nations towards that end. Terrorism remained a global scourge, and as it was the tenth anniversary of the establishment of the Counter-Terrorism Committee, it was also a time to remember the fights waged to stop terrorist acts.

The fight against impunity and human rights violations was another responsibility of the United Nations community, but that should be carried out with a global approach that was careful not to undermine regional or national efforts. He also attached significant importance to United Nations reform, especially of the Security Council. The Council’s actions remained legitimate, and its authority would be further strengthened when an agreement was made on its expansion and a more equitable place was given to all continents. Further, the protection of men, women and children should be at the forefront of concerns. The withdrawal of the United Nations Mission in the Central African Republic and Chad had left a security vacuum, which his Government was trying to fill, despite its limited resources. The dividend of efforts to help the Central African Republic in its stability and security would benefit, not only his nation, but also the subregion and the African continent as a whole.