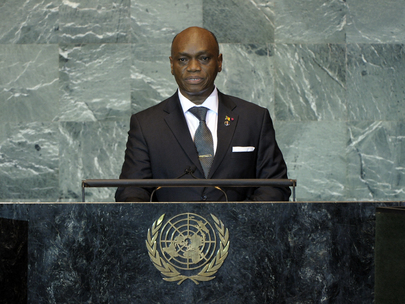 HENRI EYEBE AYISSI, Minister for Foreign Affairs of Cameroon, said that this year the United Nations had welcomed its newest Member State, South Sudan, which, among other things, had allowed a part of the African continent to “close a dark chapter of tears, bloodshed and woe”. He thanked the United Nations, the Government of Sudan, the African Union and all those that had helped bring about that positive outcome of the Comprehensive Peace Agreement. On crisis management and conflict prevention, he said that the United Nations must follow the principles of its Charter, which called for the peaceful settlement of disputes and respect for sovereignty and territorial integrity. Such settlement and preventive diplomacy, along with suppression of acts of aggression or other breaches of the peace, must be at the heart of the world body’s work. The Charter also called on individual Member States to refrain from threatening any other State or infringing on their territory.

He said that the African Union and all its members would continue to support the idea that settling any dispute peacefully must be based on local political situations, meeting the aspirations of citizens and promotion of inclusive societies. He also noted the Assembly’s recent decision to recognize the representatives of the National Transitional Council of Libya, as well as the similar decision of the African Union on the matter of Libya’s representation. Cameroon would abide by that decision.

On the home front, Cameroon was aiming to establish a favourable environment for revenue-generating activities and improving the living conditions of its people. Such programmes were absolutely necessary as the ripple effects of the financial crisis were still being felt. He said that Cameroon’s multi-year “growth and strategy document” sought to enhance socio-economic progress, boost job creation and promote broader development. A major plank of that action plan was already being implemented and could be seen in the large number of infrastructure projects that were under way throughout the country.

Turning to political matters, he said that Cameroon was continuing to shore up its electoral mechanisms to, among others, ensure the free distribution of identity cards and efforts to promote participation of Cameroonians living abroad in the 2012 presidential elections. With the assistance of United Nations specialized agencies, the Government believed that the elections could now be held peacefully. In addition, the Government would invite international observers to monitor the poll. He noted with pride the dedication of the Cameroonian people and their ability to “make the right choices” when it came to ensuring that all such exercises were carried out with transparency and in a peaceful manner. The Government and the people were committed to building a more prosperous and secure nation.