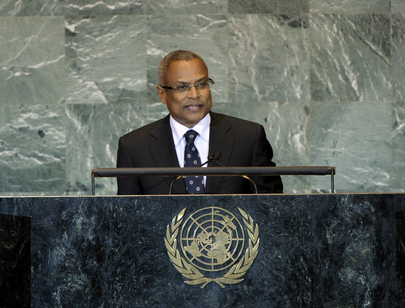 JOSÉ MARIA PEREIRA NEVES, Prime Minister of Cape Verde, said he believed he this was the first time the language of his country, Cape Verdean Creole, had been used in the General Assembly.  Speaking that language, born on the threshold of the fifteenth century, in the most important hall in a meeting of Heads of State and Government highlighted Creole’s anthropological value to all humanity, as well as the ethos of Cape Verde, historically, a meeting place for various peoples of the world.  “By so doing I also pay vibrant tribute to Aristides Pereira, the first president of Cape Verde, and a great African fighter for freedom, and human dignity. He has recently passed,” he said.

He said the Assembly session’s theme of mediation was crucial to the way of being and lifestyle of Cape Verdeans, who also considered it vital to focus on prevention and control of non-communicable diseases, specifically in the face of the challenges of developing countries.  As a small island developing State at the crossroads of two large regions, his country also counted on all others in this hall to coalesce around the goal of a green economy and sustainable development.  Cape Verde itself was implementing an ambitious programme for 50 per cent national coverage in renewable energy by 2020.

From its place in the middle of the Atlantic Ocean, Cape Verde was a strong partner for global security and interests in world trade, as well as a useful partner in the fight against trafficking and related crime, he said.  “Those who know us, know that we are a country concerned with development.  We do not settle for being a middle-income country; we need the partnership of the international community to fulfil our destiny,” he said.  Promoting effective governance, strengthening human development, confronting structural and social challenges of competitiveness and investment in infrastructure were the five pillars to transforming Cape Verde.

He said his country was developing a foreign policy for democracy, justice, peace, cooperation and sustainable development.  He worried that thousands of children dying of hunger every day in Africa did not motivate a stronger international intervention, and urged the Organization to make a more effective and assertive effort to reverse the human tragedy in the Horn of Africa.  Small States also had to have a greater voice in international decision-making, through increased reform of global governance within the Organization, including expansion of permanent members of the Security Council.