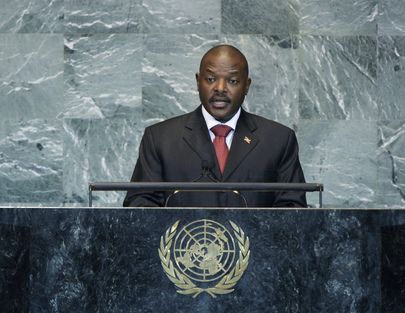 PIERRE NKURUNZIZA, President of Burundi, said that the United Nations-supported peacebuilding process in his country had led to the successful 2010 elections. The spirit of dialogue within that process had allowed the establishment of the national Ombudsman’s office and the independent Human Rights Commission. Among other things, a new land code, a national strategy for democratic governance and legislation on political parties had been developed. Not only had power been transferred peacefully, but, for the first time, the people had decided what was to be done, he said, adding that the country’s institutions were legitimate and legal, charged with protecting Burundi’s citizens and promoting economic development.

However, insecurity persisted, owing in part to the presence of former combatants and persistent poverty, stemming from rising energy prices and other financial challenges, he said. A disarmament effort was under way and the Government was continuing its efforts to achieve the Millennium Development Goals. Among other things, the number of students and teachers had increased, and training programmes had been created to train youth for future employment. Initiatives were also being undertaken for the provision of basic services, including health care for children under five. More than 2,000 schools and 80 health clinics had been built, and 2,000 pumps had been installed to provide potable water. All of those tasks had been accomplished in just three years, he noted.

Highlighting the continuing presence of armed bandits in the Great Lakes region, he noted in particular the recent tragic events at a nightclub in Gatumba, Burundi, in which victims from all ethnic groups and political leanings had been targeted. The Government had decided to provide help to the injured and to pay for the funerals of those who had lost their lives, he said. Meanwhile, those responsible had been found and further inquiries were ongoing. While the incident called for increased vigilance, it should not be seen to define Burundi. Calling on the international community unreservedly to condemn the attack, he said independent commissions were investigating recent assassinations.

Turning to regional and international concerns, he noted the situation in Somalia, where further support was needed to ensure food security and combat terrorism. The latter goal required that national Governments be able to meet the challenge, he said.