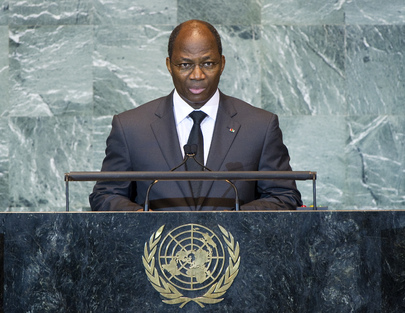 DJIBRILL YPÈNÈ BASSOLÉ, Minster of Foreign Affairs and Regional Cooperation of Burkina Faso, noting the theme of this year’s debate and underlining the important mediation role that President Blaise Compaoré had played in the resolution of crises in Côte d'Ivoire and Guinea, said his country was committed to sharing its experience in facilitating peace negotiations with the international community. Domestically, he noted, his country had been confronted, at the beginning of this year, with social unrest due to the conjunction of national and international economic problems. Those troubles were fortunately resolved thanks to inclusive dialogue initiated by the President. In addition, the Government put in place a consultative committee on political reform to strengthen the initiatives that have been in process for several years.

In social and economic areas, as part of the implementation of an accelerated strategy for growth and sustainable development, he said the Government had focused on the following sectors: education, health, water, training, youth employment and the transportation system, with the assistance of multinational and bilateral partners. At the regional and subregional levels, the country continued to work for the strengthening of the regional economic integration process through the West African Monetary and Economic Union, the Economic Community of West African States (ECOWAS) and the African Union. He reiterated his country’s full availability to support the Union’s peace and security work.

On climate change, he stressed the urgency of the problem and the need for an international solution. He saluted the initiative of Hilary Clinton, Secretary of State of the United States, on a global alliance for clean cooking stoves, from which his country could greatly benefit. He also welcomed the High-level Meeting of the Assembly on the fight against desertification, as well as the accession of many countries, including his own, to the Nagoya Protocol on biological diversity. In other areas, he looked forward to greater support from United Nations Women to the advancement of women in developing countries, and said that in this Assembly session the Group of African States would introduce a draft resolution intended to prohibit, at the international level, female genital mutilation.

Expressing strong support for the settlement of dispute by peaceful means, he pledged his country’s willingness to facilitate future mediation processes. Noting that his country contributed a contingent of 800 troops to the African Union-United Nations Hybrid Operation in Darfur (UNAMID), he welcomed the emergence of the Doha Document and called on all parties to sign it. He pledged his country’s continued work for peace in Darfur and elsewhere. He finally expressed solidarity with Tunisia, Egypt and Libya in their quest for freedom and democracy, and he supported the application of Palestine for membership in the United Nations.