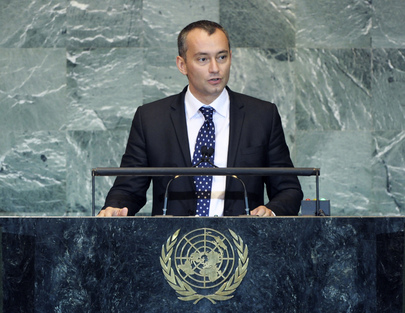 NICKOLAY MLADENOV, Minister for Foreign Affairs of Bulgaria, compared the scale of the historic change occurring in North Africa and the Middle East to that seen at the fall of the Berlin Wall and the end of communism. Although the processes were as different as the circumstances, the events shared their genesis in the need of the respective peoples concerned to break the bonds of corrupt leadership, deficient democratic processes and lack of opportunities.

Young people in those countries did not want to be forced to live in a world ruled by “ageing dictators”, he declared. “As change swept North Africa and the Middle East, some leaders cringed, others embraced it,” he said, noting that those who had opposed the will of their people were no longer in power and their countries were moving towards democratic elections. He called on President Bashar al-Assad to “come out from the shadows, dismantle the machinery of repression, and immediately call for internationally supervised elections”.

He said it was to Bulgaria and all those countries that had joined the European Union late — not by their own choice, but due to ideological divisions of the Cold War — to say it loud and clear: “To make war impossible in the Balkans we must see all countries that had emerged from the former Yugoslavia be part of the European Union. This is our historic mission. It is our destiny.” It was important that meetings between Serbia and Kosovo continue in a pragmatic fashion, and that the two sides engage in a constructive manner.