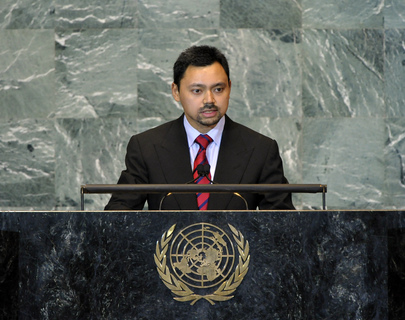 HAJI AL-MUHTADEE BILLAH, Crown Prince and Senior Minister at the Prime Minister’s Office of Brunei Darussalam, welcoming the reappointment of the Secretary-General and thanking the United Nations volunteers, peacekeepers and agencies for their efforts in extremely difficult situations, said it was a tribute to their work that one of the most complex situations had been resolved this year. In that context, he welcomed South Sudan as the newest United Nations Member State and commended all parties involved in that process. He hoped that the same sentiments would soon be expressed to the parties involved in efforts to reach a fair and equitable two-State solution to the situation in Palestine.

On the role of mediation in the peaceful settlement of disputes, he said Brunei Darussalam had been guided by the speech given by the Sultan in 1984, when Brunei had become a United Nations Member. That speech had committed Brunei Darussalam to respecting territorial integrity and the principles of dialogue and negotiation in resolving disputes. “We still adhere to this”, he said, noting that his Government gave practical assistance whenever asked, through peacekeeping and financial contributions, both bilaterally and through United Nations bodies. More than 25 years after Brunei Darussalam had made its commitments to the United Nations, there was now a new generation coming of age, which had no memory of the global situation that had shaped international policy in the cold war era. Among the challenges of “this new century” was security in all its forms — political, physical and economic — as well as other challenges that addressed the natural environment, the effects of climate change and sustainable development.

Challenges were increasingly being identified in basic human terms, he said, stressing: “No mediation can be successful unless the parties involved share common ground.” “What concerns us is that the dynamics of the twenty-first century have the potential to exclude many from this common ground.” Unseen global forces — including the market, workplace or decision-making forums — had the potential to destroy any common ground. For ordinary people, physical security meant the rule of law. Economic security translated to food on the table. In all such efforts, the world was well-guided by the United Nations. Common ground would be reached when it was shared by the most powerful of industrialized nations and the smallest island communities.