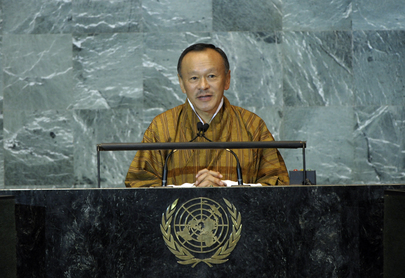 JIGME KHESAR NAMGYEL WANGCHUCK, King of Bhutan, signalling his intention to speak on the subject of happiness, said that the new era that was promised by the end of the cold war had dissolved into betrayal and disillusionment, as the world became ever more divided and insecure. As a result, year after year, the general debate had become a mournful event that discussed promises broken, endless conflict, depleted resources, and epidemic threats of financial calamities and economic ruin. Solutions were discussed, as well, but “lacking political will and indeed, clarity of vision, we deny with cleaver arguments what we know to be the cause of our predicaments.” In that way, arms were acquired to prevent war, climate change was answered with more harmful emissions, more products were consumed in face of depleting resources, faltering economies were fuelled with debt and greed, the crevasses that separate the rich from the poor were widened, and individualism was idealized as family and community crumbled amid rising social dislocation, crime, mental illness and suicide.

Guided by the belief that life satisfaction was about material pursuit and accumulation, and that good economics was about limitless growth, the economic development process had created the monster of a consumerist market economy. “But, the market give no satisfaction,” he said, “it enslaves humanity and thrives on the insatiable nature of our greed.” A clear vision was needed that would transcend the diversity of cultures and bind everyone together, one that was holistic, sustainable, inclusive and humane. It was, therefore, with a great sense of joy that Bhutan welcomed adoption of the General Assembly resolution entitled, “Happiness: a holistic approach to development”, introduced by his country, in July of this year.

Promotion of happiness as an international objective would be a natural progression from the Millennium Development Goals that aim to establish minimum conditions for human survival and a basis for development. It was about making true societal progress in ways that were meaningful, joyful and lasting. He reported that his Government, in collaboration with UNDP and leading scientists, were preparing for a panel discussion as stipulated by the resolution, proposed for the spring of 2012 before the Rio+20 conference. The goal of that discussion would be presenting to Member States a set of policy recommendations in pursuit of happiness. He looked forward to wide participation in that meeting.

His country, he said, was also willing to share its experience in promoting a peaceful and secure international environment, through equitable and sustainable economic growth that was bearing fruit within a rich biodiversity that included forest cover that had expanded from 64 per cent to 81 per cent in the past four decades. His country was the only one that had pledged to remain forever carbon neutral. Its social and cultural values remained vital, even as it embraced globalization. It had also smoothly transformed from an absolute monarchy to a full-fledged vibrant democracy. For those reasons, and out of a sense of duty, his country aspired to serve as a member of the Security Council for the biennium 2013-14. After 41 years of United Nations membership, Bhutan wished to contribute as a small State that could bring a fresh and holistic perspective to peace and security, which was not only about preventing war, but about recognizing and forging the will to deal with all forms of threat to the survival, progress and happiness of human society.