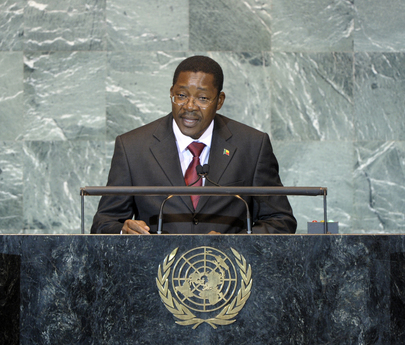 NASSIROU BAKO ARIFARI, Minister for Foreign Affairs, African Integration, Francophonie and Beninese Abroad of Benin, said his country understood the importance of mediation and had established a public mediators’ office. More broadly, there was a need for multilateralism in order to avoid a “collective shipwreck” in tackling global problems. “Nationally, we need greater cohesion,” he said, and more determination to eliminate obstacles to development. In Benin, democracy had been preserved through the United Nations tireless commitment, especially its support for computerized electoral lists, which had guaranteed polling results. Benin had worked to consolidate governance at national and local levels, notably through a package of reforms to rid structural and behavioural obstacles to governance. Strengthening democratic bodies and rebalancing their powers was at the heart of revamping the Constitution. The number of presidential terms was limited to two and anyone over the age of 70 could not be a candidate. Turning to the fight against corruption, he cited the adoption of a law in August that allowed the Government to address new forms of illicit enrichment, instilling transparency in the management of State resources and combating practices that prevented citizens from enjoying the fruits of their labour. “This is a revolution in Benin’s legal mechanisms,” he said. More broadly, the United Nations should be the leader in global governance. In the Human Rights Council, Benin would work to promote and protect all universally recognized human rights, and supported their interdependence. Despite a bleak global economic picture, countries must make progress in the areas of good governance, health, water, sanitation, primary education and women’s empowerment. Least developed countries required modern technology transfers and a greater share of international trade, which required fulfilling pledges in the Istanbul Programme of Action. On climate change, he voiced hope that the 2012 “ Rio+20” summit would lead to decisions that were in line with “the perils that await us”. On transnational organized crime, he said Benin had been targeted by piracy, armed theft at sea and illicit flows of fake medicine — a situation that complicated the search for resources to address external economic shocks and attain the Millennium Development Goals. He called on States with expertise in maritime operations for assistance, as Benin’s resources were “laughable”, given the scale of the threat. Pressing the United Nations to enhance its capacities to help States respond to such threats, he said negotiations to reform the Security Council must be stepped up, with 2015 seen as a possible deadline for completing talks and establishing an inclusive body that rectified the historical injustice to Africa. Conflict prevention also involved supporting young people, and he urged that outcomes from the recent High-level Meeting on Youth be translated into action. Indeed, only those States which gave young people opportunity would be able to meet future challenges. With respect to the Palestinian question, he said the United Nations had the means to find a lasting solution, and it should not shirk its historic responsibilities for a Palestinian State living in peaceful coexistence with Israel. He supported that goal and called on the Security Council to facilitate a rapid solution so Palestinians’ daily suffering would be relieved.