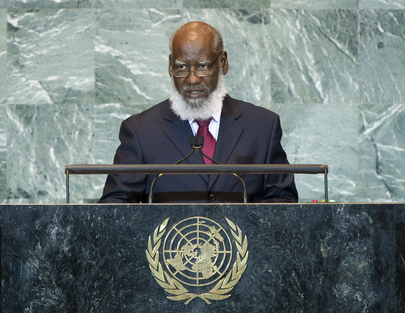 WILFRED P. ELRINGTON, Minister for Foreign Affairs and Foreign Trade of Belize, agreed that mediation was a more sensible means of ending disputes than use of force, or threats of force, especially in the case of neighbouring States.  Today’s world was characterized by widespread anxiety and insecurity, seen in financial markets and cities alike.  Debt crises, drugs and human trafficking dominated the global stage, while Mother Nature was undergoing extreme change.  Thus far, international responses had been “uninspiring” and “inadequate”.  Far too many people were dying from hunger or curable diseases, and the global economy was again bracing for setback, as recovery in major industrialized nations risked being reversed.  Against that backdrop, Belize had no doubt that the United Nations held the key to solving such problems.

For small island and coastal States like Belize, global warming posed an existential threat, he said, and it required a global response based on the principle of common but differentiated responsibility.  Twenty four such States were partnering in a sustainable energy initiative called “SIDS DOCK” aimed at transforming energy sectors, which would require delivery of the promised environmentally friendly technologies and additional funding.  On other issues, he said crime in Central America had escalated drastically over the last decade, with the arms used in most murders being received through illicit trafficking between South and North America.  The problem required international cooperation, and especially, a universally applicable normative framework to regulate the arms trade, such as an arms trade treaty that was legally binding.

Turning to a silent killer, he said non-communicable diseases could only be combated through collaborative international efforts, stressing that the political declaration adopted at the recent High-level Meeting on Non-communicable Diseases should be a template for action at all levels.  Belize awaited the development of indicators and global targets aimed at achieving a 25 per cent reduction in non-communicable disease-related deaths by 2025 and would support that initiative unconditionally.  Given the scale of such problems and the need for an ever increasing amount of resources, the international community must avail itself to every source of assistance that was available.  In that regard, he urged that the Republic of China (Taiwan) be allowed to participate in the United Nations work and that the embargo against Cuba, denounced by the Assembly for years, be brought to an end.  In closing, he said Belize recognized the United Nations’ primacy in international affairs and global governance.