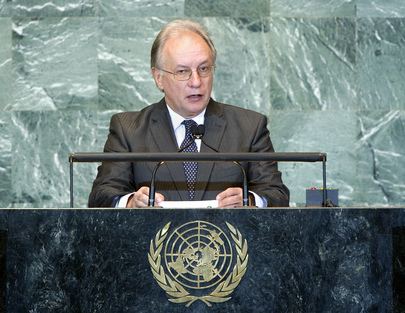 SERGEI N. MARTYNOV, Minister for Foreign Affairs of Belarus, said there was a pervasive feeling that chaos was engulfing the planet; one global crisis followed the next, international law was being shamelessly trampled and a growing number of people were suffering.  “We need a global strategy against chaos,” he stressed, adding that it must be built on strengthening international law, establishing global partnerships and revitalizing the United Nations.  In the area of international law, he said it was hardly an exaggeration to say that a civilization was determined by the extent of its transition from the rule of power to the rule of law.

In the Middle East, countries had the inalienable right to determine their own development and their choices must be respected, without interference into their internal affairs.  Unfortunately, not every country complied with such obligations, as the United States had pursued an economic blockade against “freedom-loving” Cuba, which clearly violated United Nations principles and decisions.  Belarus had also been under economic sanctions for the choice it made during its presidential election.  But, Belarusians would never renounce their right of choice.  “Neither sanctions nor blackmail nor threats will alter our stance,” he said, noting that the country stood ready to develop mutually beneficial cooperation with all countries.

On global partnerships, he said transnational threats could not be addressed with traditional foreign policy tools like balance of power, spheres of influence and sanctions.  New forms of cooperation were required that considered two major global shifts:  from the “West to the Rest” and from States to non-State actors.  Such partnerships could ensure a pooling of efforts by interested stakeholders in opposing an array of challenges that recognized no borders.  In identifying specific approaches, it was important to address the issue of transfer of effective energy technologies to developing and middle-income countries, which was integral to tackling climate change.  Such technologies had already found their practical application in many parts of the world, and it would be impossible to have a “green paradise” when poor countries lived in a “contaminated hell”.

With that, he suggested that Member States, through a General Assembly resolution, work to create a global mechanism that secured access to modern energy technologies for all countries.  He noted the important strides that had been made in the past year in forging a global partnership against slavery and human trafficking, and said it also made sense to establish global partnerships to support youth.  As for revitalizing the United Nations, the question hinged on the extent the Organization was “tenable” for devising and implementing a development strategy.  “Let us be frank.  Everyone bears grudges against the United Nations,” he said.  In recent years, the United Nations appeared to have merely survived various crises, rather than solved or prevented them.  But, the Member States were at fault.  “Together, we failed both in grasping what kind of world we wanted to build and in adjusting the United Nations to the new realities,” he said.

Offering ideas, he said the Security Council must be enlarged in both its categories, above all, in the interests of developing nations, while its working methods must be brought into conformity with the “spirit of the age”.  The Economic and Social Council should align itself with solutions to urgent problems faced by Member States.  Also, a balance must be struck among the interests of various groups of countries, and Belarus would seek to guide United Nations agencies towards a more efficient response to the specific needs of middle-income countries.  Finally, he underscored the need to enhance the United Nations’ mediation role in peaceful dispute settlement, including cooperation with regional structures like the Collective Security Treaty Organization.