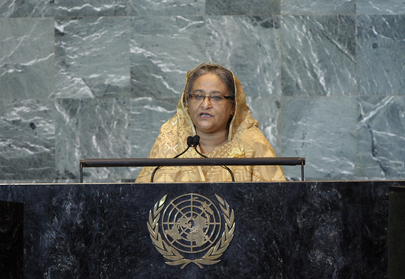 SHEIKH HASINA, Prime Minister of Bangladesh, underscoring peace as the basis for development, stressed that where peace prevailed, justice prevailed. Thus, justice for peace had found its place into her Government’s domestic and foreign policy and contributed to strengthening Bangladesh’s secular, democratic and progressive ideals. The country’s strong foundation in the rule of law had also helped the peaceful settlement of disputes with its neighbours and formed the basis of its participation in United Nations peacekeeping efforts, which had included 102,294 peacekeepers in 52 Missions in 36 countries.

She said the success of the United Nations had reinforced the belief that it was still the most legitimate, universally accepted international body in the twenty-first century with the ability to harness global collective will for the peaceful settlement of disputes through mediation. Bangladesh, therefore, lauded the Secretary-General’s report on enhancing mediation and had co-sponsored the General Assembly resolution on “strengthening the roles of mediation in the peaceful settlement of disputes”. Throughout all areas of its involvement in the Organization, Bangladesh advocated peacebuilding, development and preventive diplomacy in post-conflict societies; consciously promoted democracy, secularism, justice and rule of law; as well as equal rights for women children and minorities and other vulnerable groups. It was also committed to setting global norms and standards in development practices.

She recalled that during her last tenure as Prime Minister in 1997 she had mediated the Chittagong Hill Tracts Peace Accord for the marginalized communities from the Hill Tracts regions, as well as the 30-year Ganges Water Sharing with India. During her current term, she had also mediated and signed memorandums of understanding with India on border demarcation. Faced with the mutiny of Bangladesh’s border forces soon after forming her Government, she had also chosen a mediated settlement. Consequently, Bangladesh had developed its national mediation capacity with a pool of retired judges and legal experts capable of acting as arbitrators and mediators. It had also set up an independent Tribunal to try those responsible for crimes committed during the country’s 1971 liberation war. Its “zero tolerance” policy towards terrorism aimed to break the nexus between terrorism, extremism and radicalization.

She went on to note that Bangladesh had received a United Nations Award for Millennium Development Goal 4 on reducing child mortality. It was also on track on Goal 1 on poverty alleviation, Goal 2 on universal primary education, Goal 3 on gender equality and Goal 5 on reducing maternal mortality. Bangladesh’s Poverty Reduction Strategy, which aimed to raise 12 million people out of poverty by 2015, also aligned with the Goals. Meanwhile the recently revised National Women’s Development Policy provided for women’s empowerment, protection and equality, as well as their participation in decision-making processes. Education was currently free for girls up to class XII, and women’s political participation had increased following the 2008 general elections, with women now holding five cabinet positions, among other high-level Government positions. Among other key developments, Bangladesh was expanding the reach of information and communications technology throughout the country. Primary health services were also being delivered through 11,000 community health centres. The Government was also working to expand awareness of autism and other child development disorders.

Yet, like other least developed countries, its efforts for socio-economic security needed international support, which must come from being granted market access and equal voice in the Bretton Woods institutions, the removal of trade barriers, and the fulfilment of official development assistance, among other things. Development partners must implement the commitments made in Monterrey, Paris and Brussels before the conclusion of the Doha Round of trade negotiations. Finally, based on her lifetime of experience, she proposed a new multidimensional peace model that championed democracy and people’s empowerment through six mutually reinforcing peace multipliers: eradicating poverty; reducing inequality; mitigating deprivation; including the excluded; accelerating human development; and eliminating terrorism. That “people’s empowerment and peace-centric model” reaffirmed that all people should be treated equally and emphasized the scope of human capability.