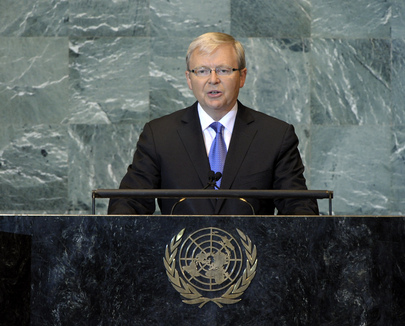 KEVIN RUDD, Minister for Foreign Affairs of Australia, said that amid dangers to the global economy, taxpayers must no longer be asked to bail out irresponsible major financial institutions. All major economies should find a credible path to prevent further outbreak of protectionism and conclude Doha, and to seek currency reform, particularly with the appreciation of the Chinese yuan. It was also crucial to drive global growth through innovative public/private finance for needed infrastructure, use carbon pricing to harvest jobs potential in the green revolution and lift full participation of women and youth.

“Some may ask: why dwell so extensively on the global economy in an address to the [United Nations] General Assembly? My answer is simple. Unless together we can craft a path to sustainable growth, and unless we avoid rolling economic crises and the continuing spectre of global recession, we will cut from underneath us the economic foundations of all that we seek to achieve through the global institutional order,” he said. Stronger regional institutions as a complement to the Organization were also needed to deal with growing security challenges in Asia, where a damaging strategic miscalculation would undermine global growth. “What happens in Asia now matters, not only in Asia, but the rest of the world.”

He said Australia stood with the rest of the international community applauding the courage of the citizens in Tunisia, Egypt, Libya and Syria seeking what was naturally theirs. The Syrian regime should heed the lessons of Libya, and he called on Bashar al-Assad to step down and political reform to begin there now. Sadly, there had been no progress towards peace for the peoples of Israel and Palestine, and if direct negotiations did not conclude matters soon, the rapidly changing politics of the region would make prospects of a lasting settlement remote.

Turning to development issues, he said the challenge had been graphically demonstrated by this year’s devastating drought in the Horn of Africa, which had left more than 12 million people in need of direct humanitarian assistance. Today, it was clear that the report card for broader efforts to lift a billion people out of poverty by 2015 was poor, with most of the Millennium Development Goals unlikely to be achieved. Among other things, the international community should get behind both regional and global efforts to meet the strategic need for food. Saying FAO was failing to fully meet its mandate to the world’s poorest, he stressed that if its new management failed to set clear priorities for the future, Australia would comprehensively review its development funding of the organization. His Government also believed the $16 billion gap in the global education funding must be closed. In that regard, it was time to consider developing a new public/private institution with an explicit mandate for school education that exclusively focused on getting nearly 70 million children into school by 2015.

He stressed that any hope of meeting the development challenge was inextricably linked to the health of the planet, and there were ecological limits beyond which humanity should not venture. Among other things, action to achieve a sustainable, prosperous marine economy — a “blue economy” — was needed. In addition, the international community would have the opportunity at next year’s Rio+20 to act decisively to protect the planet. Although so many challenges of historical consequence were before the world community, it had shown in the past year that when action was collective and decisive — as it had been in Security Council resolutions on Libya and Côte d’Ivoire — it could deliver. However, the United Nations must make its global institutions work or risk becoming a “clanging gong, full of sound and sentiment, but ultimately symbolizing nothing”.