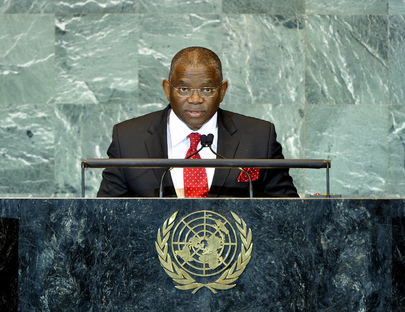 GEORGES REBELO CHIKOTI, Minister for External Relations of Angola, said the last decade had seen natural and manmade disasters, acts of terrorism and a global economic and financial crisis, all of which highlighted the fact that international cooperation was essential.  The environment, the Millennium Goals, food security, sustainable development, rebuilding post-conflict States and humanitarian aid were the world’s priorities.  Angola believed in the importance of multilateralism as the best approach to resolving the multifaceted challenges that confronted humanity.  Within the Commission on the Gulf of Guinea, Member States cooperated towards managing potential conflicts linked to sea borders, thereby providing security for a region that produced more than 15 per cent of the world’s oil.

Based on that motivation, Angola and its Armed Forces, he said, had participated in the liberation of Southern Africa, in Namibia and South Africa, along with the stabilization of the Republic of the Congo and the Democratic Republic of the Congo.  The Angolan Armed Forces were a factor for stability for Angola and the Southern and Central regions of Africa.  It was with great amazement that his Government had learned that the Angolan Armed Forces were allegedly involved in acts of human rights violations in the Democratic Republic of the Congo, in a report produced at the initiative of an agency of the United Nations Secretariat, with no specific mandate from the Secretary-General or United Nations Member States.  He underlined that Angola intervened in the Democratic Republic of the Congo at the request of that country’s Government, contributing to staunching the bloodshed and saving millions of lives.  Angola vehemently rejected the above suggestion, adding that the Angolan Armed Forces would continue to act responsibly, based on international standards and respect for human rights.

Angola’s experience showed that only peace, the democratic rule of law and respect for human rights could guarantee the stability necessary for sustainable development and the improvement of living conditions.  He encouraged the efforts undertaken by regional organizations and the United Nations in conflict resolution and peacekeeping to ensure global security and stability.  Angola was concerned about the conflict in the Middle East and supported the creation of a Palestinian State that coexisted peacefully with the State of Israel.  He urged the removal of sanctions against Cuba.  On the Western Sahara, he urged the Secretary-General to continue his efforts to help to meet the aspirations of the people there.

After eight years of peace, Angola had implemented economic and social reform policies that had allowed the revitalization of its economy and the rehabilitation of key infrastructure, allowing growth rates to average double digits and making an impact on the improvement of basic indicators of the Millennium Goals.  Since 2002, more than 2 million children had been enrolled in primary education, with 76 per cent of all children attending school.  From 2001 to 2010, infant and maternal mortality had fallen from 1,400 to 660 per 100,000.  He was convinced the international community was aware of how much still needed to be done, especially in areas of funding for development.