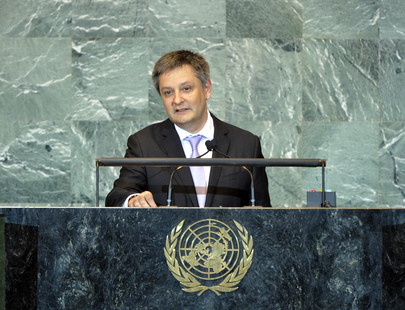 GILBERT SABOYA SUNYÉ, Minister for Foreign Affairs of Andorra, reminding the Assembly that the most serious challenges facing the international community and the Assembly today was the fight against climate change, said that up to now humanity was used to overcoming recessions and times of crisis and entering a new phase of growth without thinking of the negative external effects of that growth. Now, however, the world knew that growth was not possible at any price; that development had to be sustainable in economic terms, but also and more importantly, in environmental terms. That was why climate change was a threat as or even more powerful than the global recession.

Some developed countries, especially those that lived on their natural resources, were seriously threatened by climate change, a situation that applied to his country because Andorra too, based a good part of its economic welfare on snow and mountain tourism. That was why the country always supported any initiatives that aimed at a greater awareness of the need of fighting climate change, combating it and taking measures to adapt to what was likely to become a reality, he explained.

On international security, he observed that 2011 would mark the close of the first decade of the millennium without having resolved the threat to world security posed by international terrorism. In spite of the advances achieved on that front, terrorism arose from hatred and wickedness, and he urged the world to be aware that the phenomenon dwelled where there was a lack of economic prospect, where there was illiteracy, lack of culture, misery, marginality and general lack of democracy. Thus, the international community’s efforts in the promotion of a safer world would always be needed to combat all kinds of discrimination.

Welcoming the Arab Spring developments, he expressed hope that those democratizing movements would be consolidated in the future. He supported South Sudan’s membership in the United Nations and noted that a more democratic world was a more dynamic and safer one, because it was fairer. Regarding the Israeli-Palestinian conflict, he implored the international community to continue to encourage dialogue and mediation, pointing pout that the Palestinian people’s aspiration to have a democratic and peaceful State was as legitimate as the Israeli wish to obtain a guarantee for its existence and security.