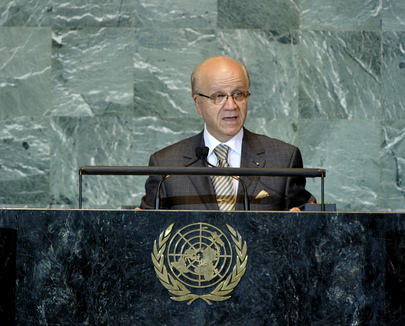 MOURAD MEDELCI, Minister for Foreign Affairs of Algeria, said the General Assembly’s theme of mediation appeared at a time of growing tensions, economic crisis and shrinking multilateralism. The international system founded in 1945 today needed to adapt to new realities. The inability, as individuals or collectively, to manage the current challenges underlined the urgent need to make structural changes.

He said that certain current situations had led to the loss of human life, and Algeria deplored the violence, calling for interventions to ensure justice, democracy and the sovereignty of each country. Algeria hoped the situation in Libya had stabilized. His country wanted to work with the new National Transitional Council. The tumultuous situation with Palestine was another source of deep concern. The blocking of the peace process in the Middle East and the continued building of settlements had made lasting peace more distant every day. That risk-laden situation was an affront to the peoples of the region. The human embargo on Gaza and its borders was a collective punishment. Palestine’s application for statehood was an opportunity to impose international law. He was concerned, however, over the use of economic measures, including sanctions, such as the embargo on Cuba. Turning to Western Sahara, he said no efforts should be spared for dialogue and communication to assist the Saharan people to achieve their right to self-determination.

Concerning terrorism, he said this year’s tenth anniversary of the terrorist attacks on the United States should be a reminder for the international community to bolster its efforts to tackle that scourge. Algeria stressed the need to speed up the adoption of a convention to combat terrorism. Overall, multilateralism was the way forward to strengthen cooperation. Current challenges included, first, the inability of the United Nations and the Security Council to manage conflicts. Second, the recent economic and financial crisis, which had had devastating effects, especially in developing countries, laying bare a system riddled with large private groups aimed at growth and development at the exclusion of the countries of the South. And third, the dramatic impact of climate change, which was a major challenge for the future of the world.

The United Nations should undergo reform to achieve collective security and to succeed in the upcoming events on the United Nations agenda, including to manage the problems posed by climate change. Algeria supported a multilateral approach to those challenges because it had seen the effectiveness of that approach, including recent African Union initiatives. Algeria, for its part, had undertaken major political, economic and social reforms. At the political and institutional levels, the country had, among other actions, provided greater freedom for the audio-visual media and made an amendment to electoral law. At the economic level, efforts had been made to ease operating businesses, and measures had been taken to make it easier for youth to enter the job market. Those actions had been launched amid a democratic process that reinforced the rule of law.