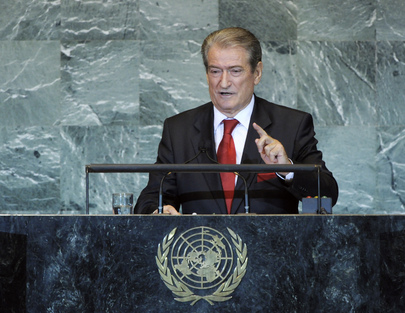 SALI BERISHA, Prime Minister of Albania, said amid the complex crises that currently threatened the peace and security of several regions, this year’s springtime was a historic season for Africa and the world, with 125 million oppressed people standing up to overthrow tyrannical regimes in five countries and open the gates of freedom. As his country had only 20 years ago brought down the Hoxhaist dictatorship, he cordially welcomed the representatives of Côte d'Ivoire d’Ivoire, Egypt, Libya, South Sudan and Tunisia.

Today, Albania, once plagued by extreme poverty and starvation, belonged to a group of countries with middle- to upper-income levels, boasted the smallest public sector in Europe, had a functional democracy and was a NATO member, while remaining firmly focused on its path towards European Union integration. Albania’s economy had remained strong through the recession, with exports rising by 300 per cent in recent years, and was based on economic freedom. Four factors contributed to its economy’s resiliency: a small public sector, a 10 per cent flat tax rate, heavy infrastructure investment and facilitating business development. To achieve Albania’s dream of being a “developed country”, his country was committed to sustainable development and was determined to become a “small superpower of renewable energy”.

His country fully supported the Partnership for Open Government, and had expanded Internet access to all schools and free services to every citizen in all post offices nationwide. E-government and transparency would strengthen democracy and the law guaranteed free access for all citizens to all acts, decisions and expenditures of the Government.

Turning to regional affairs, Albania had excellent relations with neighbours and those in the region, and would like to further relations with Serbia. Kosovo also had an equally strong will for good neighbourly relations, he said. The International Court of Justice had decided in 2010 that the declaration of independence of Kosovo was in full compliance with international law. The Republic of Kosovo had been recognized by 80 States and he called upon the rest of the States, United Nations Member States, to recognize the free and independent State, which had become an important factor of regional peace, stability and cooperation. He also called on Serbia to adapt its positions in line with the International Court of Justice’s decision, thus demonstrating that it accepted and respected the international law in its entirety and not only those parts that served its case.

In accordance with the European Union Rule of Law Mission, the Kosovo multinational security force (KFOR) and other international institutions present in the country, Kosovo had implemented the highest standards in the region and beyond regarding the freedoms and rights of minorities. The most worrying problem for Serbs in Kosovo was tensions created and orchestrated for nationalistic purposes. Interethnic relations in all areas where Serbs and Albanians lived together were good. He said respect for borders in the Balkans was a fundamental condition of lasting peace and stability. Belgrade’s efforts to maintain parallel structures of authority in the three Serbian homogenous communes north of Mitrovica demonstrated it still believed in reshaping borders based on the failed idea of ethnically clean countries.

He also invited Serbia to cooperate with the search and return of the remains of 1,500 Albanians abducted and massacred in Serbian territory only for their nationality. Addressing allegations against Albanians regarding organ trafficking and mass graves, Albania had officially invited the European Union Rule of Law Mission to investigate all aspects that involved any part of the Albanian territories. He thanked the European Union Rule of Law Mission, reassuring the Mission that Albania would fully cooperate with the investigation team and would offer them all facilities needed to perform their tasks, so the truth could be brought to light.

Also exercising his right of reply, the representative of Albania said he profoundly disagreed with the Serbia’s statement. Albania was convinced that an independent Kosovo was the only solution to the issue of an area long torn by conflict; Albania continued to hope that Serbia would come to terms with that “undeniable and unreversable” reality. Regarding the International Court of Justice’s opinion, he reiterated that the Court had found that the declaration of independence by Kosovo had violated no international law. He was still waiting for Serbia to accept that decision.

Whoever spoke of dividing Kosovo was “looking back to the dark ages”, he said. As German Chancellor Angela Merkel had said recently in Belgrade, Serbia must implement agreements with Kosovo, allow the European Rule of Law Mission in Kosovo (EULEX) to operate in the whole of Kosovo and abolish its parallel governance structures in the north. The Albanian Government regarded the [Dick] Marty report, mentioned by the representative of Serbia, as a series of unfounded conclusions that had no match with reality. Albania had offered that EULEX could investigate in full any part of the report’s allegations, he added, noting that such an investigation was the only way to “cut short the propaganda” that the Assembly had heard tonight. The question was only whether Serbia would accept the opinion of that investigation, or if it would simply ignore it, as it had with the International Court of Justice’s decision. For its part, Albania was fully ready to develop its relationship with Serbia.