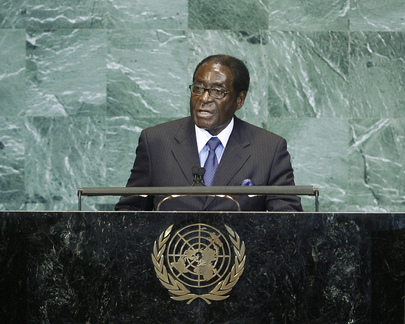 ROBERT MUGABE, President of Zimbabwe, reaffirmed commitment to the United Nations and, in particular, to its comprehensive agenda for the promotion of peace and security, sustainable development and human rights. Like others, he recognized the need to reform the Organization in order to make it better able to carry out its various mandates. The General Assembly was the most representative organ of the United Nations, and thus its position as the chief deliberative policymaking organ should be respected. Zimbabwe’s position on Security Council reform was well known, and it was “completely unacceptable” that Africa was the only continent without permanent representation in that body.

“Africa’s plea for justice can not continue to be ignored,” he said, adding that Zimbabwe would also continue to advocate greater equality in international economic relations and decision-making structures. The developing world continued to suffer from the effects of the global financial crisis. The critical issues faced would not be addressed when so many countries were left out of the key decision-making processes of institutions of global governance. All countries needed to participate in making policies and taking decisions that affected the lives and livelihoods of their people. To that end, he called for the reform of multilateral financial institutions, including Bretton Woods institutions.

He noted that climate change was one of the most pressing global issues of our time, and that talks in Copenhagen in December 2009 had failed to produce a successor to the Kyoto Protocol. Yet, that conference had been significant as it showed the futility of the rich imposing their views on the poor. The issue of global food security continued to be a matter of great concern and he reiterated the call for an urgent and substantial increase in investment in agriculture in developing countries.

Zimbabwe condemned the use of unilateral economic sanctions and other coercive measures in international relations. Such measures were completely at cross-purposes with the principles of international cooperation enshrined in the United Nations Charter. Turning to several other issues, he called for an end to the United States embargo on Cuba, expressed concern over the stalemate in the Middle East peace process, and noted several reforms that were implemented by his Government, such as the Global Political Agreement.

Continuing, he said that constitutional outreach programme was under way, and upon its conclusion would lead to a new draft constitution. The three parties to the Global Political Agreement worked to implement most of the issues they agreed on. In that regard, he commended the Southern African Development Community (SADC), the African Union, the Non-Aligned Movement and indeed like-minded members of the international community who gave their support.