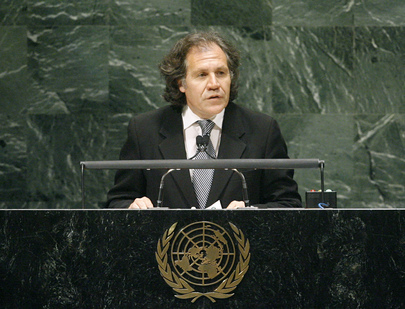 LUIS ALMAGRO, Minister for Foreign Affairs of Uruguay, reaffirmed his country’s commitment to international law, the peaceful solution of conflicts, respect for human rights, and the sovereign equality of States, which found their maximum expression in the United Nations. His country also rejected the threat and use of force, and the application of coercive measures contrary to the Charter — such as the trade and economic embargo against Cuba by the United States. That last unilateral measure was contrary not only to the Charter, but international law and one of the most dearly held principles of his country’s foreign policy — the peaceful settlement of disputes. His country had a long tradition in the promotion and protection of human rights, being among the countries that had subscribed to the widest number of international conventions. Its long tradition had allowed it to assume a predominant role in protecting children’s rights, working with a formidable ally — the United Nations Children’s Fund (UNICEF).

The elimination of nuclear weapons was also among Uruguay’s causes, as was reducing and controlling conventional weapons, he said, highlighting strong support for a nuclear-weapon-free world. His country had contributed to strengthening the Tlatelolco Treaty — the first nuclear-weapon-free zone in a densely populated area of the world — and the Non-Proliferation Treaty, and believed the entry into force of the complete nuclear test ban and a ban on the production of fissile material would deepen advances made in disarmament. On conventional weapons, he supported a legally binding arms trade treaty. His country also participated in United Nations peacekeeping, its commitment demonstrated by the deployment of 2,500 blue helmets, principally in Haiti and the Congo. He added that the gap between the complexity of mandates and the existing capacities was a challenge that must be confronted each day, as such missions could not be sustained without serious consideration of the resources necessary.

Further, there was no sustainable peacekeeping without early efforts for peacebuilding, which should be incorporated early in mission planning, giving as much attention to strengthening institutions as to security. Conflict prevention, mediation and preventive diplomacy should be at the forefront, he said, using Haiti as an example. As a country that had deployed more than 10,000 military personnel to that country from 2004 to the present, Uruguay had advocated for a mandate that, without neglecting security needs, permitted helping establish the conditions necessary for strengthening the country’s productive capacity. In his opinion, greater emphasis should be placed on providing teachers, doctors, agronomists and volunteers. On the issue of peacekeeping reform, that should take place amid current United Nations reforms, including of the Security Council. Uruguay’s pilot experience with the Delivering as One programme showed the country’s commitment to reform. Now, Uruguay sought a non-permanent seat on the Security Council in 2016, being the only candidate country in the region at present time.

Turning to global governance, he said it was imperative to work jointly towards building long-term strategies and solutions that would lead to more just and equitable societies. The United Nations role in international economic and financial governance was fundamental for democratization of decision-making that guaranteed participation on a level playing field. Uruguay called on Member States of the Group of 20 (G-20) to focus activities on searching for solutions that would reinitiate the circle of global economic growth with equality, inclusiveness and transparency. Also, development would have limited effects without a healthy environment, a challenge facing his country. National plans and strategies required continued United Nations support to bolster strong, medium- and long-term social development. The current economic crisis marked the closing of a cycle of growth and demanded a new way of thinking about development. To mitigate the negative impacts, developing countries must have new and additional resources to allow them to apply counter-cyclical policies. The elimination of subsidies and other non-tariff trade barriers that currently impede market access was indispensable, as was a conclusion to the Doha Round, with the result duly taking into account the development perspective.