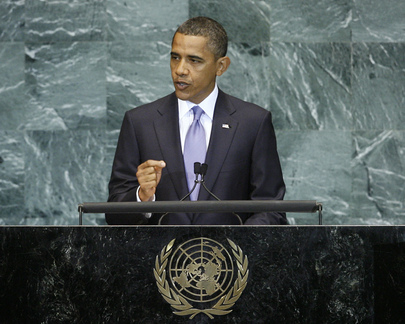 BARACK OBAMA, President of the United States, said the United Nations had been built from the rubble of war and designed to help States pursue peace. Outside the Assembly today, the neighbourhoods of New York City told the story of a difficult decade, marked by the destruction of the World Trade Centre and a financial crisis on Wall Street that affected people around the globe. The global economy had suffered an enormous blow, crippling markets and deferring dreams on every continent. Underneath those challenges were deeper fears: ancient hatreds and religious divides.

Over the last 20 months, there had been no greater focus for the United States than rescuing its economy from catastrophe, he said. It was reforming its finance system and had made the G-20 the focal point for global coordination, as the circle of cooperation must include emerging economies. Today, the global economy was growing again, protection had been resisted and expanded trade was being explored. “We will not rest until these seeds of progress grow into a broader prosperity,” he said.

As for common security, the United States was waging more effective fight against Al-Qaida, he said, adding that it had also responsibly removed nearly 100,000 troops from Iraq and now was focused on building lasting partnership with the Iraqi people. In Afghanistan, United States was pursuing a strategy to break the Taliban’s momentum and build the Government, so that a transition to Afghan responsibility could begin next July. From South Asia to the Horn of Africa, the United States was moving to a more targeted approach to dismantle terrorist networks, he said, denying extremists the most dangerous weapons. The United States had signed with the Russian Federation a comprehensive arms treaty, reduced the role of nuclear weapons in its security strategy, and at the United Nations had worked to strengthen the Nuclear Non-Proliferation Treaty (NPT).

As part of those efforts, Iran had been extended a hand last year, he said. Iran had both rights and responsibilities as a member of the global community. It was the only country to the NPT that could not demonstrate the peaceful intentions of its nuclear programme, such actions had consequences. If it failed to do so, the United States, through Security Council resolution 1929 (2010), had made it clear that international law was not an empty promise. The United States sought a resolution to difference and held an open door to diplomacy. Regarding climate change, the United States had helped forge an accord in Copenhagen that had forced all major economies to cut emissions. It was a first step. It had also pledged assistance to Pakistan and he urged all to support such efforts. When Haiti was devastated by an earthquake, the United States had joined a coalition of countries in response.

Amid such upheavals, the United States had pursued peace, he said, recalling that last year, he had pledged to support the goal of two States, Israel and Palestine, living side by side in peace and security, as part of comprehensive peace. This month, the United States had pursued direct talks between Israel and the Palestinians. While many were pessimistic, saying that peace simply was not possible, he asked delegates to consider the alternative: Palestinians would never know the pride that came with their own state. Nor would Israelis know security among neighbours committed to coexistence. More blood would be shed. “I refuse to accept that future,” he said, asking each to choose the path of peace. Parties must answer the call of history.

He called on Israelis and Palestinians to rally behind the goal that their leaders shared. A test of that would centre on Israel’s settlement process and he urged that the moratorium be extended and that talks press on until complete. Security for Israel meant statehood for Palestine, and rights of Palestinians would be won only through peaceful means, including reconciliation with Israel. The Arab Peace Initiative Follow-Up Committee should make tangible steps in that regard.

After thousands of years, Jews and Arabs were not “strangers in a strange land”. Those who long to see an independent Palestine must also stop trying to tear down Israel, which was a sovereign State. Efforts to chip away at its legitimacy would be met with United States opposition. He challenged the Assembly to come back next year with an agreement that would lead to a new United Nations Member, an independent, sovereign State of Palestine, living in peace with Israel. Three great religions saw Jerusalem’s soil as sacred and if that was recognized, next year could be different.

Indeed, the United Nations reflected people’s desire to address the emergencies that would inevitably come and he said foresight must be summoned to consider what would be built in the long term. Freedom, justice and peace for the world must begin with human beings. That was a matter of moral and pragmatic necessity for the United States.

The United States supported universal values and understood from experience that those defending them were the closest friends and allies; those who had denied them had chosen to be adversaries. Tyranny was still active, whether seen in the Taliban, a North Korean regime that enslaved its people or in an armed group in the Democratic Republic of the Congo that used rape as a weapon of war. There was a false notion at play that economic growth could come at expense of freedom. However, democracy, more than any other form of Government, delivered for its citizens and the United States was working to shape a world that fostered such openness.

Yesterday, he said he had put forward a new development policy that recognized that global development was in the common interest. Governments’ obligation was to empower, not impede, individuals. Calling civil society the conscience of communities, he said the United States would always extend itself beyond the halls of government. It was promoting new tools of communication, and in repressive societies, to do so securely. The United States supported a free and open Internet. The common thread of progress was that Government was accountable to its citizens. Everywhere, there was a promise of innovation to make Government more accountable, and next year, States should bring forward commitments to fight corruption, leverage new technologies, and live up to ideals that could light the world. The United States saw a future in which the cloud of recession gave way to renewal and opportunity.