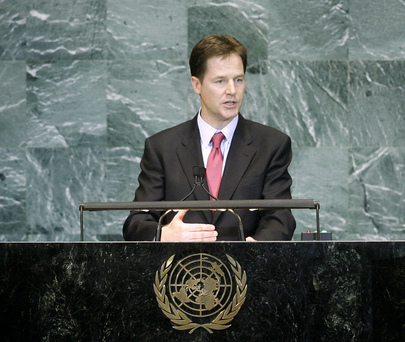 NICK CLEGG, Deputy Prime Minister of the United Kingdom, said countries today understood how deeply the world had changed since the creation of the United Nations. The spirit of citizenship of that era was needed today as never before, with the world facing three broad issues: a redrawing of the power map; the globalization of challenges; increasingly fluid forms of identity; and increasing potency of ideas. Taken together, all that meant a new world was at play and those issues needed matching responses. Institutions must be aligned to deal with them. Liberal values and human rights must be promoted to win the conflict of ideas.

In all three areas, “we are not doing anything like what we must”, he said. The effects of multilateralism were in question in the wake of the global financial crisis, climate change and stalling of global trade talks. Nations had been reticent in promoting human values and a new confidence in the expression of ideals was needed. Addressing the first issue, he said the distribution of military power was changing and power was being wielded in different places and ways, which required changing institutions and freeing up international trade.

The Security Council must reflect the new geography of power, and the United Kingdom supported permanent seats for Brazil, India, Germany and Japan, as well as African representation. He said that closer cooperation on counter-terrorism was also needed. Without a radical overhaul, the United Nations would not provide the needed leadership. The European Union’s vital role in promoting prosperity should be represented in the Assembly. The United Kingdom welcomed the United States’ efforts to revitalize the peace process between Israel and the Palestinians and was committed to helping end hostilities. On efforts to end weapons proliferation, he welcomed the recent Nuclear Non-Proliferation Treaty Review Conference, saying his Government would work to make the world safer.

Turning to Iran, he said he had been prepared to welcome the “E3+3” on Iran, but instead, an issue of grave concern had been overshadowed by bizarre comments by Iran’s President yesterday, which were meant to distract and generate media headlines. “They deserve to do neither,” he said. In other areas, “a trading world was a safer world”, and a global trade deal would be worth $170 billion annually. “We simply cannot afford protectionism,” he said. A more ambitious deal than originally envisioned was needed.

Addressing the globalization of problems, he said economies — and their prosperity — were tied together like never before. There were also global networks of terrorism, and the world must get used to the idea of “stateless problems”, as conflicts now took place both within and across national boundaries. Conflict undermined collective prosperity and the sources of violence must be tackled. The United Kingdom had been at the forefront of United Nations efforts to deliver more effective peacekeeping, but that alone was not the answer.

Peacebuilding also was needed and the United Nations was uniquely placed to both keep the peace and make it last, he declared. The coming year would see challenges in that regard: in Sudan, where a referendum would be held on southern Sudan; in Somalia, where the African Union was playing a crucial role; and in the Democratic Republic of the Congo, where more must be done to achieve real security. The United Kingdom was fully committed to bringing peace to Afghanistan. Progress was being made and the United Kingdom would continue to help Afghans build a better country, he added. Moreover, its commitment to allocate 0.7 per cent of its gross national income (GNI) to international development assistance would be enshrined in law.

Those values could not be claimed by any one nation, he stressed; they were global values with global force. Countries should never apologize that women and men were equal, or shy away from the insistence that no one be silenced because of their religious beliefs. He wished to see the Human Rights Council do more to ensure that States implemented their obligations. The United Kingdom’s foreign policy would be shaped by those three issues and the Government would promote its ideals and interests while remaining realistic in its approach. Moreover, it was reviewing its strategic security policy, as threats today were often less visible than in the past. “Security must be judged by how able we are to respond to unpredictable threats,” he said. The United Kingdom had learned that democracy could not be created by dictate. The new Government would restore the United Kingdom’s international reputation by pursuing a “hard-headed foreign policy with liberal outlook”.