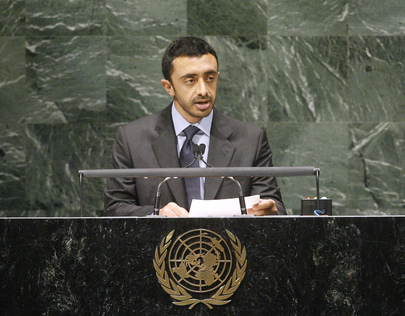 ABDULLAH BIN ZAYED AL NAHYAN, Minister for Foreign Affairs of the United Arab Emirates, said the ongoing significant challenges facing the international community required strengthened collective action and increased international efforts in the United Nations and its balanced and responsible reform.  He reiterated deep regret at the continued occupation by Iran of the three United Arab Emirates islands Greater Tunb, Lesser Tunb and Abu Musa, and demanded the return of those islands to his country’s full sovereignty.  He affirmed that all procedures and measures taken by the Iranian authorities since their occupation of the islands were null and void, and without legal effect, regardless of how long the occupation lasted.

He said he looked forward to seeing Iraqi parties forming a national Government that continued to build its security, political and economic institutions; extend its authority over the entire territory of Iraq; and achieve national reconciliation, which was the real guarantee for stabilizing the political process in the country and embracing all factions of Iraqi society, without exception or discrimination.  Satisfied with the withdrawal of foreign troops from Iraq, he expressed firm condemnation of all acts of violence and bombings that targeted Iraqi people.  He reiterated the need to respect Iraq’s sovereignty and independence, and to refrain from interference in its internal affairs.

Turning to the Arab-Israeli conflict, he said peace could not be achieved without ending the Israeli occupation of Palestinian and Arab territories, and its withdrawal to the line of 4 June 1967, including East Jerusalem, the Syrian Golan Heights and the remaining occupied territories in southern Lebanon.  The United Arab Emirates stood by the Palestinian National Authority and supported the Palestinian people in their quest for achieving their national goals and restoring their inalienable legitimate rights.  Commending President Mahmoud Abbas for continued efforts to restore his people’s rights, he affirmed support for the Authority’s position in direct talks with Israel.

His country hoped that the independent Palestinian State, with its capital Al-Quds Al-Sharif, saw the light next year.  He also welcomed the United States President’s emphasis on the importance of leading direct negotiations into final results within one year, and seeing Palestine take its seat in the Assembly’s sixty-sixth session.  His country’s commitment to the achievement of peace as a strategic choice made it imperative to condemn the Israeli practices committed against the Palestinian people. Continued Israeli settlement activities, and confiscation and judaization of Occupied Palestine and other Arab Territories clashed with the pursuit of peace.

He said his country would continue its international policy guided by United Nations objectives and Charter principles, especially with regard to the promotion of international peace and security, the peaceful resolution of disputes, non-interference in the internal affairs of States, and compliance with the principles of international law.  It would continue to extend its distinct contributions to regional and international partnerships aimed at building a more peaceful, stable and just world.  He looked forward to a world that promoted dialogue, interaction, mutual understanding, cooperation and coexistence among all religions and cultures, without discrimination.  On the basis of that understanding, he condemned terrorism in all its forms and manifestations, wherever it existed, and stressed the need to intensify regional and international efforts aimed at combating it.  His country, a member of the global initiative for combating nuclear terrorism, would continue to strengthen cooperation in all areas of intelligence exchange, among other areas, and expected other States to shoulder their duties.

He touched on several points, including climate change, noting that his country had initiated a partnership programme with Pacific small island developing States.  He hoped that States parties to the Climate Change Convention would achieve concrete results before the meeting in Cancun.  He was pleased at the entry into force of the Statute of the International Renewable Energy Agency, which his country hosted.  His Government was moving forward with its peaceful nuclear energy programme, and emphasized its commitment to all requirements of nuclear non-proliferation and its compliance with the highest standards of transparency and nuclear safety; it had ratified the Additional Protocol to the Nuclear Non-Proliferation Treaty.  He welcomed the creation of UN Women, saying his country was implementing various national programmes for empowering women.  On another matter, he called on the international community to develop an integrated global strategy to eliminate human trafficking.  He also supported the activities of the Alliance of Civilizations forum.