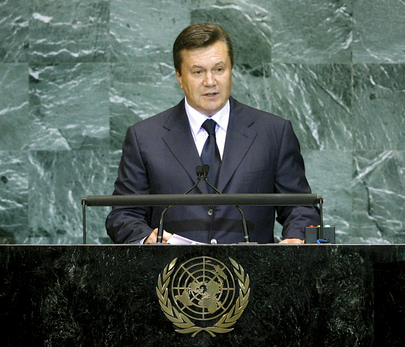 VIKTOR YANUKOVYCH, President of Ukraine, stressed that his country approached such issues as poverty eradication, education, environmental preservation and improving maternal health with full responsibility, with its achievements laid out in its national report on the Millennium Development Goals. Ukraine was undergoing profound internal change, having finally achieved political stability and launched economic and social reforms, which would allow it to participate more actively in implementing the United Nations processes. He urged expanding the free movement of people, goods and services, saying that new free trade areas and visa-free travel regimes were important for responding to global challenges.

Sustainable development, he continued, was impossible without security, and Ukraine had actively contributed to peace worldwide. This year, Ukraine declared its “non-bloc” status, which had reduced regional tension and created a strategic balance around the country. Sixteen years after Ukraine had given up the world’s third most powerful nuclear arsenal, that decision had not lost its importance, with recent decades showing that nuclear weapons did not always increase security. The best way to counter their proliferation was by eliminating them, while taking steps also to reduce the risks related to the proliferation of nuclear materials and technology. Ukraine hoped to see its partners comply with their obligations of security guarantees, especially the 1994 Budapest Memorandum. Such guarantees for States that had disposed of their arsenals, and those not part of a military alliance, should be reflected in a legally binding global instrument.

Turning to other areas, he said the principles of coexistence, respect for sovereignty and territorial integrity, and good neighbourly relations were the cornerstone of Ukraine’s foreign policy. To enhance global security, the United Nations could make greater use of existing regional security mechanisms and strengthen its peacekeeping. Mechanisms to respond to new challenges, like piracy and armed robbery at sea were needed, and the United Nations should play a key role in that fight. Ukraine would work to increase international maritime security and the protection of seamen’s social rights, which would require cooperation.

“Soft” challenges must also be addressed, he said, noting that the global community should do its utmost to avoid a worst-case scenario related to climate change. By signing the Copenhagen agreement, Ukraine had taken a step in that direction. A global environmental organization with universal membership was also needed. In addition, he said the peaceful use of nuclear energy was crucial, and States possessing nuclear technologies bore a huge responsibility in that regard. With next year marking the twenty-fifth anniversary of the Chernobyl accident, Ukraine planned to hold a high-level international conference next April to discuss nuclear safety.