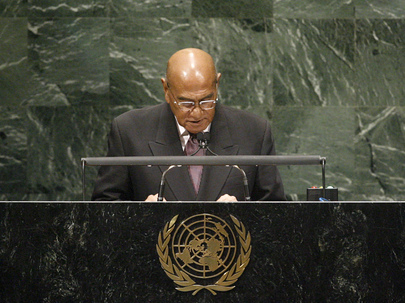 SONATANE TU’AKINAMOLAHI TAUMOEPEAU TUPOU ( Tonga) highlighted the positive results across the Millennium Development Goals that his country had achieved, including addressing the needs of households that suffered from poverty; reaching a net enrolment ration of 93 per cent in primary education in 2008; and creating the Tonga Energy Road Map for development with more than 20 partners. He noted Tonga’s participation in the High-level Review of the Mauritius Strategy of Implementation last week, saying it offered small island developing States an opportunity to focus on areas of improvement. He also called for the creation of a formal category for those States within the United Nations system to improve linkages and the ability to respond to their specific needs. With regard to countries that are most vulnerable to climate change, he reiterated Tonga’s call for a dedicated stream of readily accessible “fast start” financing projects for small island developing States.

Stating Tonga’s support for reform of the United Nations Security Council, he said: “There should be expansion in both categories of permanent and non-permanent membership with certain States worthy of such membership — Japan, Germany, Brazil and India — on an enhanced Council.” He also expressed his country’s support for the current direct talks between the Israeli and Palestinian leadership being guided by United States President Barack Obama, the diplomatic Quartet on the Middle East peace process and regional neighbours to find a comprehensive, just and enduring settlement.

As a result of Tonga’s presentation of its partial submission to the Commission on the Outer Limits of the Continental Shelf earlier this year, a concern arose about the likely lengthy time frame in which submissions such as Tonga’s stood to be considered, he said, encouraging fellow States Parties to the 1982 United Nations Convention on the Law of the Sea to consider the adjustments necessary for the Commission to fulfil its mandate in a timely manner. Adding that elections under Tonga’s “new system” of governance were to take place on 25 November, he reaffirmed his country’s respect for the values of the United Nations. “Despite our size, our remoteness and our geographical isolation, we are not immune to the global challenges that beset us all and, therefore, we have a responsibility to our Government and our people to be more than mere bystanders in the work of our Organization,” he said.