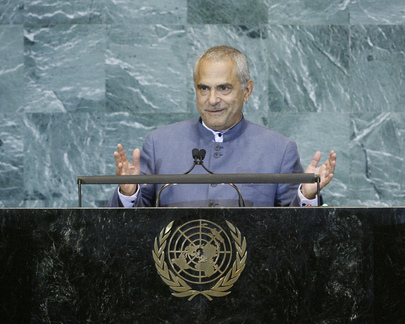 JOSÉ RAMOS-HORTA, President of Timor-Leste, acknowledged Mayor Bloomberg for “his intellectual clarity and moral courage in standing for the rights of American Muslims in building a Cultural Centre and sacred place of worship in Lower Manhattan”.  At the same time, he stated, “What President Ahmadinejad said during the forum in regard to the terrorist attacks on the World Trade Center was an obscenity.”  “Otherwise,” he said, “we fully subscribe to Iran’s legitimate rights to develop nuclear technology for peaceful purposes and we caution the powers that be not to be hasty in reaching conclusions that may lead to irreversible catastrophic decisions”.  That said, the country expressed serious doubts about the reliability and safety of nuclear energy, recalling Three Mile Island and the Chernobyl nuclear meltdown.  “Nuclear weapons”, he added, “are not a short cut to superpower status as some in Asia seem to think and do not insure anyone against twenty-first century conventional and non-conventional security threats”.  They had, in fact, “become obsolete”.

He noted that Timor-Leste was not independent until 2000 and had only set its Millennium Development Goals targets in 2004, but the country enjoyed real peace and economic growth of over 12 per cent.  Infant and under-five mortality rates had already reached their 2015 targets.  School enrolment had increased to 83 per cent and he estimated that within two to three years, Timor-Leste would be completely free of illiteracy.  About 30 per cent of its General State Budget was allocated to public health and education.  In addition, the nation was finalizing this year its own Road Map — 2011-2030 Strategic Development Plan that would lift its people into an upper-middle-income country by 2030.

In terms of good governance, he drew attention to the 1July 2010 report of the Extractive Industries Transparency Initiative that gave the nation the number one spot in Asia and number 3 spot in the world for sound, transparent and effective management of its oil and gas revenues.  He also noted that the nation set up an Anti-Corruption Commission, and he hoped they would be able to stamp out that malignant cancer.  As regarded human rights, he said, women made up almost 30 per cent of the deputies in the National Parliament.  The nation’s Constitution prohibited the death penalty and Timor-Leste had ratified all core International Human Right Treaties.  Also, recently he had issued pardons to all former soldiers and police officers involved in the violence in 2006 and 2008.

Turning to other issues, he appealed to President Barack Obama to release five Cuban citizens and lift financial and economic sanctions as well as the trade embargo against Cuba.  He commended Israeli and Palestinian leaders for their renewed dialogue and said the aborted decolonization of Western Sahara was an indictment of the international community.

As pertained to United Nations reform, he underscored the importance of making the United Nations, including its agencies and programs, less bureaucratic and more efficient in their internal management and services delivery.  Further, the Security Council had to be expanded to accommodate the “new demographic and economic realities of the twenty-first century”, granting major regional powers such as India and Brazil permanent member status.  Concluding, he thanked the international community for the “steady and generous” assistance provided to his country in its years of need.