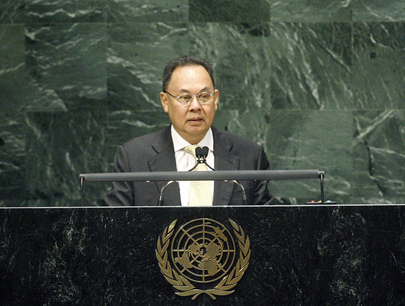 KASIT PIROMYA, Minister for Foreign Affairs of Thailand, said: “We live in a world of divides. […] Be they politico-security, socio-economic, digital, or even based on beliefs.” Such divides presented challenges to peace, security, prosperity and human dignity. The United Nations, where nations could work together as one, was required to overcome them. The effectiveness of international cooperation depended on the strength and willingness of individual nations, and Thailand was ready to help the world cross into a better future. Thailand had its own divides, but her people were capable of overcoming challenges thrown before them. The Thai Government was committed to democracy, good governance and human rights and was resolutely working to heal the political and social division in the country, setting up an independent fact-finding commission to look at tragic events earlier this year. The Government also recognized that some political grievances arose from economic disparities in society and it was working to bridge economic and social gaps.

Many conflicts stemmed from economic injustice, he said, and global economic growth should be balanced and inclusive. The recent global financial crisis had been a reminder “to live within our means” and alert concerning the necessity of better global governance. Thailand engaged in regional and international forums and believed the Association of South-East Asian Nations (ASEAN), which it chaired, would help complement ongoing global cooperation to achieve balanced and sustainable growth. Thailand, a developing country herself, believed in greater cooperation between developing countries. It had achieved most of the Millennium Development Goals and was ready to share knowledge and experience, especially in alleviating poverty and improving well-being. Through regional bodies and bilateral cooperation, Thailand worked with its neighbours to improve social welfare and build essential infrastructure. Food security was the most important development problem. As a major food exporter, his country could contribute to ensuring greater food security. The ASEAN Plus Three Emergency Rice Reserve was a model for others to emulate. On climate change, which he said was “undeniable”, Thailand would increase its forest area and renewable energy usage.

Development was linked to human security which was linked to human rights, a core principle of the Thai Government, he said. As a member of the Human Rights Council, Thailand aimed to make it more effective through a more even-handed approach that engaged concerned countries to forge consensus. Instead of mere criticism and imposition of values seen as foreign, we must persuade countries to understand human rights were values common to all. Thailand also rendered humanitarian assistance to countries near and far, and remained ready to offer its facilities as a staging centre for humanitarian assistance in its region. Thailand also supported efforts towards disarmament and non-proliferation of weapons of mass destruction and believed that the United Nations must continue its active role to that end, but major Powers and regional entities must also do their fair share. The South-East Asian Nuclear-Weapon-Free Zone was a good case in point. It was also far less likely for a community of nations to wage war with itself, which was why the Association of South-East Asian Nations was steadfastly becoming a community — economically, socioculturally and politically.

Thailand has also done its part in peacekeeping for the past two decades, contributing nearly 20,000 troops, police officers and civilian staff worldwide, and recently began to assist international efforts protecting ships from pirate attacks in the Gulf of Aden area. It was poised to play a greater role ensuring peace and security, and asked support for its candidature for a non-permanent seat on the Security Council for the 2017-2018 term. Thailand believed the Council had played an indispensable role maintaining international peace and security, but should be adjusted to better reflect world realities to work with greater efficiency, transparency and engagement. Thailand was wholly committed to the United Nations and its ideals, and would continue to work closely with the Organization.