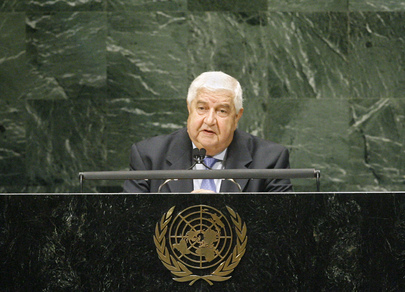 WALID AL-MOUALEM, Minister for Foreign Affairs of Syria, noting that the Middle East had been rife with tension for decades, said policies, interests and trends that had unfolded on its soil had, at times, converged and at other times, clashed. Because of its location, the region influenced its neighbours in Asia, Europe and Africa. Syria, at its heart, had experienced those tensions, which defined its perspective on external issues. Safeguarding Syrian and Arab interests was the priority and the door was open for an in-depth dialogue that aimed to reconcile differences and provide a base for progress. That had been Syria’s response when it endured attempts to isolate it. Indeed, civilized international relations must be built on openness and dialogue, rather than isolation and aggression.

Israel’s land appropriation and settlement building continuing unabated, he said, and while peace talks were under way, such activities threatened to make the two-State solution a “dead letter” that stood no chance of survival. Feverishly pursuing Judaization plans in Jerusalem, Israel’s actions also threatened the safety of that city’s holy sites. Through a fait accompli policy, Israel had imposed its will, regardless of whether talks continued. “Peace can be genuine only if there is a genuine will to make peace,” he said, adding that Syria wished to see a just, comprehensive peace achieved by implementing Security Council resolutions 242 (1967), 338 (1973) and the Arab Peace Initiative. The occupied Syrian Golan was not negotiable and recognition that it must be returned fully was the basis on which peacemaking plans should be made. Syria was ready to resume peace talks from the point where they had stopped through the Turkish mediator, if it found in Israel a committed partner to such terms of reference.

Noting with satisfaction the Human Rights Council fact finding mission report on the Israeli attack on the “Freedom Flotilla”, he looked forward to conclusions being drawn. On Iraq, Syria embraced any improvement in conditions “with a major sense of relief”, as Iraq’s sovereignty, preservation of Arab and Islamic identity and unity of its people were of the utmost priority. The withdrawal of United States forces was a positive first step, and he expressed hope Iraq would ultimately develop strong military and security capabilities as a sovereign State. Iraqi security was contingent on its national unity, based primarily on its Arab-Islamic identity and on the participation of all “stripes” of Iraqis in building a future.

Syria had advocated the creation of a nuclear weapon-free zone in the Middle East since 2003, he said, noting that Israel must be made to comply with decisions calling on it to adhere to the Treaty on the Non-Proliferation of Nuclear Weapons, which was extremely significant for the region’s security. Efforts to shelter Israeli nuclear installations from International Atomic Energy Agency (IAEA) oversight only encouraged it to continue with its nuclear military programme and fostered a policy of double standards that ran counter to non-proliferation prerogatives. All States had the right to acquire nuclear technology for peaceful purposes and he called for the peaceful resolution of all disputes relevant to that issue. In Sudan, Syria was dedicated to that country’s unity and sovereignty, while on Cuba, he reiterated the call to lift the embargo. On climate change, he looked forward to an expression of international solidarity in Cancun, based on scientific evidence and the principle of common but differentiated responsibility.