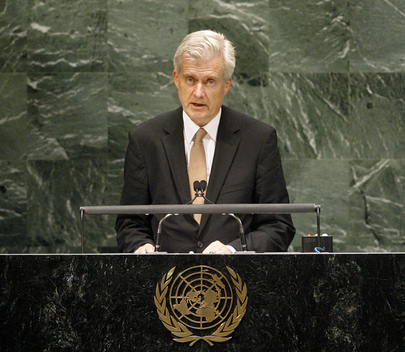 MǺRTEN GRUNDITZ (Sweden), aligning with the European Union’s written statement which would be delivered to all Member States, said every country needed to assume its share of global responsibilities. All countries — developed and developing alike — had a shared responsibility to achieve the Millennium Development Goals by 2015. The development and prosperity of poor countries depended largely on their ability to integrate into the global economy. Robust international rules for open trade and investments were key, he said, adding that free trade benefited both rich and poor countries. Joint efforts were needed to ward off the threat of climate change as well, as the natural disasters which devastated Haiti and Pakistan had shown. States must cooperate not only to work towards concrete climate goals, but also to prioritize disaster preparedness and risk reduction on the national level to assist those in need on the ground.

States also had a shared responsibility to promote respect for human rights. “Without respect for human rights and fundamental freedoms, all other progress will be incomplete,” he stressed, highlighting several human rights violations occurring around the world which needed to be stopped. In that regard, Sweden was “deeply worried” by the situation in countries like China, Viet Nam, Egypt, Myanmar, Cuba, Democratic People’s Republic of Korea, Eritrea, Iran and Sudan. In the Democratic Republic of the Congo, reports of sexual violence against women were part of a pattern of conflict-related crimes that had been carried out with impunity over many years, he said. The hope of a lasting peace called for the empowerment and equal participation of women in negotiations and decision-making.

“Lasting peace can never be achieved while there is impunity. It is high time to fully implement resolutions 1325 (2000) on women, peace and security, and 1820 (2008) on sexual violence in conflict situations,” he declared. Few aspects of State cooperation through the United Nations illustrated shared responsibility better than joint efforts in preventing and managing conflicts, as well as keeping and building sustainable peace. However, the international community must increase the United Nations capacity to help countries in transition from war to lasting peace. Furthermore, the United Nations must have the right tools to help prevent countries from lapsing into conflict in the first place. Lastly, he touched on situations in Afghanistan and the Middle East, and then stressed the importance of stopping the spread of nuclear weapons. The early entry into force of the Comprehensive Nuclear-Test-Ban Treaty was urgent, and the “unacceptable deadlock” in the Conference of Disarmament must come to an end.