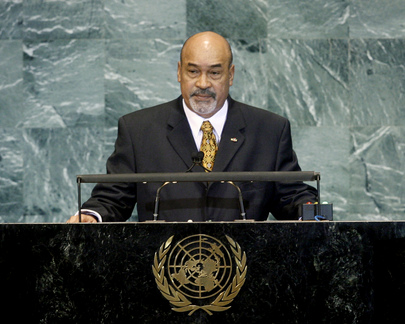 DESIRÉ DELANO BOUTERSE, President of Suriname, said there had been no fundamental change since he told the Assembly 27 years ago that the United Nations “lofty goal of creating an international order based on respect for international law and the peaceful settlement of disputes, seemed elusive as ever”.  Change required the international community to refrain from using military force and/or economic coercion.  Suriname rejected the unilaterally imposed embargo against Cuba, which had caused unnecessary hardship on the development and well-being of its people.

He said Suriname was at a crossroads; its leaders had been given a mission to create a society in which everyone participated and shared in the country’s offerings.  The aim was to create a just society in which people could develop themselves to their highest potential and become international role models.  “No one will be left behind in this task of nation-building,” he said.  The Government pledged to protect national inheritance and assets for future generations, and would seize opportunity to generate national wealth.  He sought to break the isolation and improve the quality of life of the indigenous people and countrymen living in tribal communities.

Fulfilling that task while facing the country’s many challenges, however, would not be easy.  Almost all sectors of the economy and society suffered enormous neglect that left many people desperate and hopeless.  A bold visionary approach was needed to provide its people what they justly deserved as “co-owners” of the nation that was blessed with many riches.  Nevertheless, the country must overcome two challenges that had haunted and blighted the national destiny since colonization.  First, it must dismantle the colonial police state, which blocked a free, democratic, constitutional State free of Government corruption; a legislature that acted in the interest of the people; and free press.  Second, it must transform its society from an economy that was merely a source of profit for foreign interest groups into one based on healthy interdependence, an approach, he said, “created by Surinamers and for Surinamers”.

Regarding climate change, Suriname, with its low-lying coast, was among the top 10 countries that would be affected by sea level rise.  Even though the country had not contributed to the excessive levels of greenhouse gases, it was set to “take a heavy brunt”, he said.  Regarding biodiversity, Suriname could serve as a model for saving forests:  it boasted a 90 per cent forest cover, and had rightly been called the “greenest country on Earth”.  Nevertheless, Suriname’s environmental track record was overlooked and taken for granted by the global community.

Despite a lack of incentives in place for it to continue on the path of sustainability, Suriname promised to respect a proper balance between nature and development.  In closing, he said his Government believed education related to survival skills and production was the only way to eradicate poverty.  Money given to poor people for the sake of one’s own conscience was wasteful.  Therefore, his country’s slogan was, “break away from poverty by pursuing wealth”.