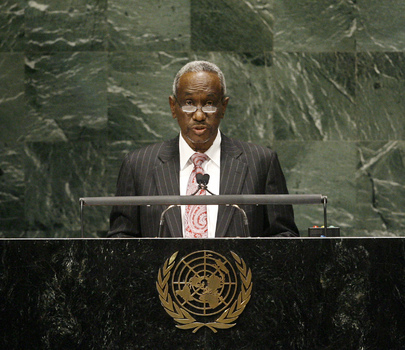 ALI OSMAN MOHAMED TAHA, Vice-President of Sudan, said despite development aid by the United Nations and the international community, the financial and economic crisis had resulted in the deterioration of the foreign debt situation and hampered the ability of developing countries to achieve their Millennium Goals.  Despite Sudan’s challenges, it would continue to work towards creating an atmosphere of integrity and unity that would be the best choice for the people of South Sudan.  In a brief review of developments, he outlined the positive developments in implementation of the Peace Accords, signed in 2005, and the steps made to establish peace in Darfur.  He also commended the atmosphere of tranquillity and peace in the holding of public elections in Sudan last April.

Arrangements were under way for the Referendum on Sudan, concerning the options of unity or separation on the part of the South, he said.  He was “keen that the brothers in the south of Sudan” would be allowed to decide without any coercion or dictation, and in an atmosphere of integrity and transparency.  Sudan would also do its best to ensure that unity was the voluntary choice of citizens of the south of Sudan.  He welcomed the decision of the General Assembly President to ask Sudan’s former President to chair the team of Latin nations that would observe the Referendum.

The Government had made many efforts to establish peace in Darfur, he said, and to return the vitality of the region affected in the last years by conflict, proliferation of arms and regional and international intervention.  The transformation had made elections possible in all of Darfur and helped to establish democracy, encouraged new situations on the ground and encouraged the Government to set forth its new strategy for Darfur.  The strategy was based on five main elements:  establishment of security; consolidation of development; resettlement of displaced persons to live in dignity; internal conciliation to promote social peace; and continued negotiations to reach a political settlement by the people of Darfur under the Doha agreement.  In order to achieve those goals, the Government allocated $1.9 billion to be spent over 4 years to cover development efforts and requested additional aid from the international community.

The strategy required two practical approaches.  First, it required the adoption of a partnership with countries and States, first and foremost the United Nations-African Union Mission in Darfur (UNAMID) and the United Nations.  Second, it required a special effort to protect the citizens of Darfur and strengthening of regional relations to establish peace in Sudan.  He appealed to Member States to participate in a forum to establish stability in that part of Sudan.  He added that the International Criminal Court had become a tool to break the will of the people.  Therefore, he rejected its intervention.  In that regard, he called on the Security Council to reconsider its decision and withdraw its file completely from the International Criminal Court, and instead refer it to the Sudanese system of justice.  He also asked that Sudan be forgiven for its debts, according to the same standards as other developing countries.

In closing, he said the economic crisis and climate change had widened the circle of hunger and increased tensions in Africa, and he reiterated Sudan’s need for humanitarian assistance to help in its fight against poverty, malaria and reaching its Goals.  Regarding the Arab-Israeli conflict, he asked why the Palestinian people continued to suffer, and called for the freezing of Israeli settlements.  Regarding climate change, he said mitigating its effects was a mission that required an international effort.

Speaking in exercise of the right of reply, the representative of Sudan said that the Assembly had listened in the morning’s meeting to the representative of the Netherlands, who said in his statement that “a person such President Al-Bashir, against whom there was an order of arrest, should not be allowed to move freely in countries that were parties to the ICC.” Accordingly, he wanted to tell the speaker from the Netherlands that Sudan’s delegation was surprised by such a statement, because it expressed an ignorance of the statute of the International Criminal Court. Sudan was not a party to the statute.

The statement also showed a blatant ignorance of the principles of international law that even students in the first years knew. In that respect, he wished to refer to the Vienna Convention of treaties that stipulated that a State that was not party in an agreement was not bound by the provisions of said treaty. Further, following the visit of Sudan’s President to Kenya and Chad, the African Union had reaffirmed its commitment to all State parties to the Union and had praised the courageous stance of Kenya and Chad. Finally, such a statement by the representative from the Netherlands was interference in the internal affairs of his country. It was the right of any country to host whomever they wanted, and his delegation was still moved by memories of heinous colonialism that usurped the freedom and wealth of nations.