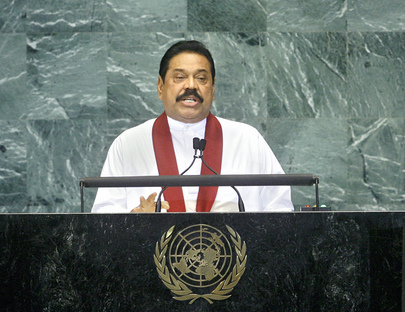 MAHINDA RAJAPAKSA, President of Sri Lanka, said the fact the United Nations was in the sixty-fifth year of its existence served to underline the Organization’s durability as an important mechanism to ensure cooperation between States and discussion between sovereign nations. Saying that he was giving this address at a critical juncture in the history of his country, he added that in two months, he would be assuming a second term in office. His mandate would be different from the last; he planned to deliver sustainable peace and prosperity, and ensure that terrorism would not be able to raise its ugly head again.

In 2005, he was elected on a promise to rid the country of terrorism and was proud and humbled that Sri Lanka was now at peace. Over the past year, much was reported regarding the country’s liberation from terrorism. “However, far less has been said of the suffering we had to undergo and the true nature of the enemy we have overcome,” he said, and added that the rapidly forgotten truth was that the country faced one of the most brutal, highly organized, well-funded and effective terrorist organizations, which could even spread its tentacles to other countries.

Many of the atrocities of terrorism that the West experienced recently had been present in Sri Lanka for nearly 30 years. Almost 100,000 lives had been lost, among them the President of Sri Lanka, intellectuals and politicians. The Liberation Tigers of Tamil Eelam (LTTE) was an organization so brutal that even those it claimed to represent, the Tamil community, were as much victims of its terror as the rest of the population. Those observing from afar who suggested the Sri Lankan Government should have conceded to the demands of those terrorists needed to be reminded that “terror is terror, whatever mask it wears”. His responsibility was to the peace and prosperity of the nation.

Invoking the capacity of current international humanitarian law, he said it must be remembered that such law evolved essentially in response to conflicts waged by the forces of legally constituted States, not terrorist groups. The asymmetrical nature of conflicts by non-State actors gave rise to serious problems which needed to be considered in earnest by the international community. He reminded that, “We, along with many others, made repeated attempts to engage the LTTE in constructive dialogue,” but the attempts were rejected.

The entire focus was now on building peace, healing wounds and ensuring economic prosperity. In order to fulfil those aspirations, economic development and political reconciliation needed to go hand in hand. Towards that end, constitutional changes would evolve with full participation of stakeholders. He mentioned the return of 90 per cent of the internally displaced persons, rebuilding of the eastern province, and establishment of a Lessons Learned and Reconciliation Commission. He welcomed support from the international community as rebuilding took place, and said the economy was well on its way to realizing the dividend of peace, as the economy grew by 8 per cent in the last quarter.

Despite the struggle against terrorism, the country graduated from middle income status, unemployment declined to around 5 per cent, poverty went from 25 to 15 per cent. In order to receive full potential he welcomed a supportive external environment. He concluded by saying that leaders who have been chosen by their people faced difficult decisions; they must be entitled the goodwill and confidence of the international community, and the results of their decisions needed to be evaluated objectively and allowed to speak for themselves.