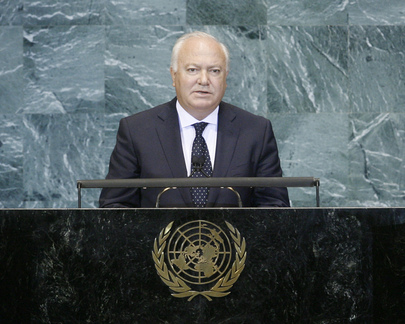 MIGUEL ÁNGEL MORATINOS CUYAUBÉ, Minister for Foreign Affairs and Cooperation of Spain, said the first decade of the twenty-first century had seen terrorist attacks on New York and Washington, the bankruptcy of Lehman Brothers investment bank and stress in intercultural relations.  Such events were taking place amid rapid growth and interdependent transformation — an historical crossroads where United Nations reform must be promoted.  New governance mechanisms should be established to update the system of international relations.  Effective multilateralism stemmed from efforts of the Assembly and the commitment of world leaders.  It was based on respect and the recognized value of building common strategies.

The United Nations success, and its capacity to deliver, had been seen after natural disasters suffered by Haiti and Pakistan, he said, while the year had also seen progress made in security, disarmament and nuclear non-proliferation matters.  The new Treaty on the Reduction and Limitation of Strategic Offensive Arms (START) allowed for a 30 per cent reduction in nuclear warheads in the United States and the Russian Federation, marking the greatest nuclear pact in 20 years.  Signatories to the Nuclear Non-Proliferation Treaty agreed to hold a 2012 conference to transform the Middle East into a nuclear-weapon-free zone.

On the economic front, the absence of international regulation enabled the crisis of financial institutions, he said, meaning that international markets needed not only an “invisible hand”, but also a global regulating system.  Europe had adopted measures to harmonize legislation, allowing regulatory authorities to exercise executive and disciplinary powers.  The European Union also must have an appropriate status in the Assembly, subsequent to the Lisbon Treaty’s entry into force.  As for climate change, he encouraged efforts to reduce emissions and dependency on fossil fuels.  The Summit on Climate Change, to be held in Cancun, Mexico, would succeed only with an approach that favoured vulnerable countries, which in turn, should bring about an ambitious agreement with certifiable objectives and commitments.

Turning to women, he said the tenth anniversary of resolution 1325 (2000) should bring about consolidation of gender equity in the public and institutional spheres.  In the Middle East, Spain continued to work so that the process of direct talks between Israel and Palestine led to a two-State solution, and he urged maintaining the freeze on settlement activity.  In the Western Balkan region, he said the full integration of its countries in the European Union was an essential priority for Europe.  Some issues had to be addressed and the Assembly’s adoption of a consensus resolution on one of those issues expressed the global community’s will to achieve stability in that region.  Finally, on Africa, he said progress made in good governance and democratization must encourage optimism and allow the international community to overcome crises in the Sahel, Somalia and the Great Lakes Region.  Instruments of intercultural diversity, including the Alliance of Civilizations, should be reinforced.