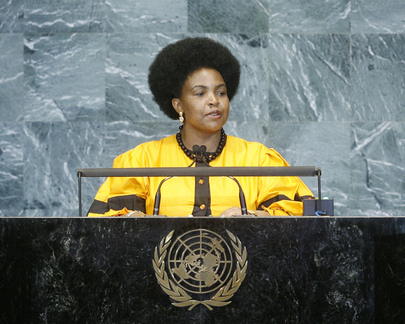 MAITE NKOANA-MASHABANE, Minister of International Relations and Cooperation of the Republic of South Africa, said the United Nation’s relevance as a multilateral mechanism that could administer and resolve today’s complex challenges could not be overemphasized.  South Africa was committed to working with other Member States to address these challenges and make the United Nations more relevant, responsive and representative.  Its growth from 51 members in 1945 to 192 members today demonstrated the confidence that people around the world placed in the Organization and the ideals of its Charter.  The Organization was instrumental in ending the universally despised apartheid system in South Africa.

The revitalization of the Assembly was a cornerstone of the United Nations reform agenda and South Africa supported measures that aimed to enhance its effectiveness, especially regarding its role in maintaining international peace and security, she said.  No transformation could be complete without a fundamental reform of the Security Council that made the body truly representative of the Organization’s membership and responsive to international crises, as mandated by the Charter.  “It remains indeed a travesty of justice that Africa, which constitutes a large portion of the work of the Council, is not represented in the permanent category,” she said.

Turning to economic issues, she noted that the Doha Development Round of the world trade talks, crucial to the developing South, had not been concluded, while the global economic crisis had emphasized the need for an international financial architecture that represented the South’s development needs.  South Africa looked forward to the transformation of this architecture, including the reform of the Bretton Woods institutions, to build a world system founded on equity and social justice.

As the African Union Chairperson, Bingu wa Mutharika, President of Malawi, had told the Assembly during the general debate’s first day, peace and stability were a precondition for a “new beginning” in Africa, she said.  The United Nations had to view Africa as a partner to maintain international peace and manage conflict, as it strengthened the working relationship between the Council and the African Union Peace and Security Council.  South Africa would continue to support all international efforts to help Palestine and Israel find a lasting peace and she also called for the lifting of the embargo against the Republic of Cuba.  She said the 2010 FIFA World Cup tournament, held earlier this year in South Africa, demonstrated the role that sport can play in advancing development and peace.  The fans also celebrated diversity and Ubuntu — that I am because you are — and confirmed faith in a belief that a better world was possible.  As it played a central role in the global system, the international community could best respond to that message by making sure that the United Nations was more relevant, inclusive and representative.