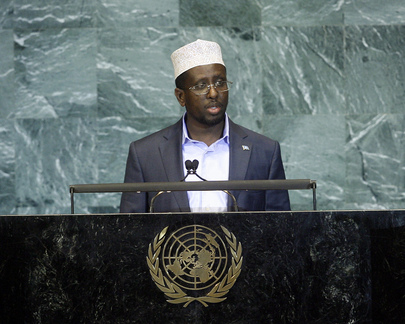 SHEIKH SHARIF SHEIKH AHMED, President of the Transitional Federal Government of Somalia, said that unfortunately, after 65 years since the inception of the United Nations, the world was not more secure, as shown by “the rampancy of bloody and destructive wars around the world and the proliferation of extremism and terrorism”.  His country, in particular, had been witnessing the alarmingly increasing extremist tendencies of Al-Shabaab and Hizbul Islam, with the former openly boasting about its allegiance to Al-Qaida and seeking to establish in the Horn of Africa a terrorist hub to “wreak havoc in the region and beyond”.

The solution, he said, for the twin dangers of terrorism and the piracy that was collaborating with it in havoc, lay in restoring peace and stability on land in war-torn Somalia, he said, calling on the international community to address all those menaces without delay.  In addition, he said, illegal fishing and the dumping of toxic waste in Somali territorial waters have increased piracy and induced deadly diseases and must be dealt with.

Other accomplishments of the transitional Government, he said, included the rehabilitation of Government institutions, the recruitment of competent professionals, the delivery of foodstuffs to the needy and internally displaced persons, the creation of opportunities for youth, capacity-building for the civil service, training for security forces, preparation of the draft constitution, re-commissioning of the judiciary organs, creation of an environment conducive to national dialogue and reconciliation, and ending internal discord through democratic processes.

In view of those efforts and the challenges that lay ahead, he called on Member States to continue their commitment to the Somali cause, particularly in training national security forces and providing support to the African Union Mission in Somalia (AMISOM).  He called on the Security Council to pass a strong resolution to deter the spread of Al-Qaida and their home-grown affiliates such as Al-Shabaab.  Furthermore, he called on Member States to continue their support to the transitional Government in its efforts to provide services to the Somali people, as well as other efforts to stabilize the country, such as investing in the rehabilitation of critical State institutions, particularly in the legal and educational sectors.

In conclusion, he expressed profound gratitude to all those who had been providing assistance to his country.  On the other hand, he emphasized the gravity of the current political and economic situation and stressed that unfulfilled promises would not, in any way, assist Somalia out of that current, perilous condition.  With good planning, commitment and continued support, Somalia could, for the first year in two decades, be reporting good news – peace, progress and prosperity.