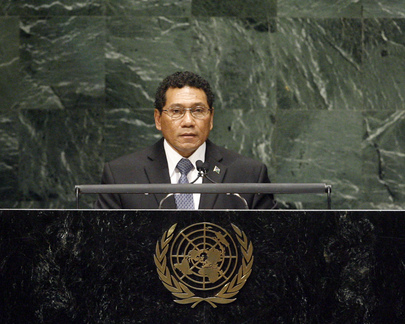 PETER SHANEL AGOVAKA, Minister for Foreign Affairs and External Trade of Solomon Islands, said that, under its new foreign policy, his country would establish relations with “all six regions of the United Nations” and stood ready to enhance the United Nations presence in its capital, renewing the call to upgrade the United Nations sub-office in Honiara. Solomon Islands also appreciated the Political Affairs Office and United Nations Development Programme (UNDP) for their roles in coordinating approximately 400 local and international observers who monitored last month’s general election. “A number of electoral reform recommendations were made, and will be acted on by my Government with the view of improving our national electoral system,” he said.

Stating that each country had to define for itself the form of democracy it wanted to adopt, he noted that Solomon Islands continued to advocate for genuine dialogue and engagement with Fiji over confrontation and sanctions, and supported Fiji’s efforts to determine its destiny. He also called for the lifting of the 49 year old economic embargo on Cuba, saying, “Such embargo belongs to a different time and era.”

Although the country’s seven year relationship with the Regional Assistance Mission to Solomon Islands had brought political and financial stability, Solomon Islands remained committed to addressing issues of tolerance and respect for diverse cultures, as well as the underlying causes of the conflict that remained unresolved, he said. Solomon Islands also supported all peace initiatives, including proposals to normalize relations between the entire Arab region and Israel. Additionally, it saw the total elimination of all nuclear weapons as the only absolute guarantee to creating a safe and secure world.

Emphasizing the need for a legally binding agreement on climate change, he said: “It is critical that we must have a clear path of stabilizing green house gas emissions. Solomon Islands supports the small islands developing States (SIDS) call to reduce temperature rise below 1.5 °C and to bring down green house gas concentration to well below 350 parts per million.” In May of this year, Solomon Islands were among eight Pacific Small Islands Developing States that set up the Nauru Agreement and agreed to coordinate the management of their tuna resources. The country also offered to host the establishment of the 1982 United Nations Convention on the Law of the Sea (UNCLOS) regional marine scientific centre.