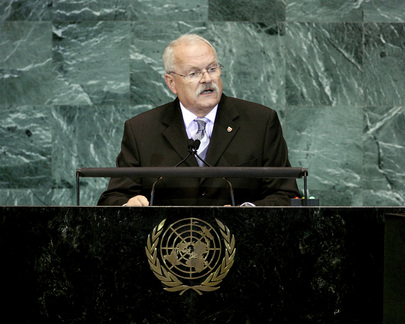 IVAN GAŠPAROVIČ, President of Slovakia, said that one of the most important missions of the United Nations was to act as a guarantor of the formulation, protection and implementation of the principle of collective security of States. The preservation of international peace and security at the global level, and within the bounds of international law, must remain at the core of United Nations activities. That was important, because peace and security became particularly vulnerable in times of global financial and economic crises and required increased attention on the part of States. The arms control and disarmament process represented the most important instrument for the prevention and conflicts. The progress that had been achieved in the area of the non-proliferation of weapons of mass destruction gave reason for “cautious optimism”. The duty of the international community was to continue that effort and to strengthen the global system for the non-proliferation of weapons of mass destruction. The risk of such weapons falling into the hands of terrorists, however, remained high. In that regard, his country remained prepared to cooperate with its partners on a number of priorities, such as the entry into force of the Comprehensive Nuclear-Test-Ban Treaty.

Peacekeeping operations represented one of the most visible activities of the United Nations in its effort to preserve peace and security in the world, he continued. As an active contributor to such missions and other international crisis management operations based on a United Nations mandate, he welcomed the steps towards reviving the reform of peacekeeping operations, as described in “A New Horizon for Peacekeeping”. The new Global Field Support Strategy would also contribute, in real terms, towards more rapid deployment of peacekeeping missions and, at the same time, ensure more efficient utilization of human and financial resources.

According to the United Nations Charter, the primary responsibility for international peace and security lay with the Security Council, he noted. The process of the reform of the Council could, however, almost be called a never-ending story. His country was, therefore, pleased that the intergovernmental negotiations on the reform had been given a clearer shape. That reform must stand on the pillars of representativeness; effectiveness in fulfilling its mission; and transparency of its working methods. It must also allow for possible enforcement of the Council’s decisions by sanctions.

He said creating the conditions for equitable and sustainable development needed to go hand in hand with respect for nature and its rules. There was an inherent link between those two, as both had an impact on the lives of individuals, who were part of the universal system. The people of Slovakia had had the misfortune of witnessing nature’s power, as floods of an unprecedented scale had ravaged the country earlier in the summer. That showed that a proper balance needed to be struck between development and respect for nature. That balance should be based on well-reasoned arguments supported by proper analysis, without giving way to the influence sought by certain narrowly focused transnational organizations that called themselves environmentalists.

Touching on a broad range of other issues, including the situation in the Middle East, Africa and the Western Balkans, he said the United Nations had to be able to respond to the challenges of the twenty-first century and that called for synergies across the United Nations system and among Member States.