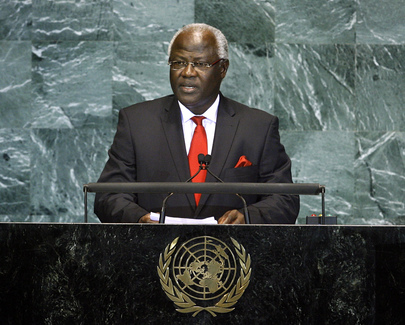 ERNEST BAI KOROMA, President of Sierra Leone, describing successes, said that, thanks to the global community’s engagement, Sierra Leone was on a path to sustained economic growth, with a 4 per cent annual growth rate — higher than the average 2 per cent growth of sub-Saharan Africa — and now ranked fifty-third on the Global Peace Index. To protect basic rights, the Government had put in place justice sector reforms in response to national and global demands, and was among the few countries emerging from conflict to have formulated a comprehensive action plan for Security Council resolutions 1325 (2000) and 1820 (2008). It was determined to ensure their implementation in addressing gender-based violence.

Sierra Leone’s commitment to a free media was equally strong, he said, and the Government was delivering results on key priorities in his Administration’s “Agenda for Change”, notably with its launch of free health care for pregnant and lactating women, as well as in efforts to commercialize agriculture, an economic mainstay. Improvements made on infrastructure, including road construction and delivery of electricity to key provincial regions, would help generate economic activity. Further, the Sierra Leone Trade and Investment Forum, held last summer, had successfully attracted large-scale international investors.

Despite his country’s great strides, many challenges remained. In order to make progress, the Government must remain committed to improving human rights and good governance, in addition to fighting corruption and drug trafficking. Nevertheless, he said tackling those issues required further technical assistance and cooperation, private capital investments and access to advanced technologies.

Regarding the Millennium Development Goals, he said progress was uneven, particularly among developing countries, and most notably in Africa, and that the economic and financial crisis had only further compounded their challenge. While the United Nations remained the “hub” for maintaining peace and security, he said, transparency and equitable representation in the Security Council was imperative for reform, but was long overdue. In closing, he requested that the Council allocate at least four seats to Africa, which remained the only continent without representation. “No one continent should have an exclusive monopoly over membership,” he said, and urged all delegations to muster the political will required for progress.