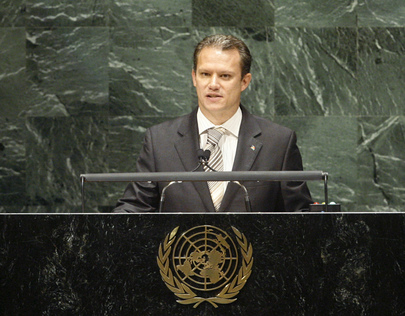 JEAN-PAUL ADAM, Minister of Foreign Affair of Seychelles, said that although his country had made great progress toward achieving their Millennium Development Goals, it was still “pedalling furiously” to not lose any ground. However, he asked the Assembly what the next step in 2015 would be and how the world community would proceed from that point, since efforts to achieve sustainable development for all could not just end in five years. Furthermore, middle-income countries such as Seychelles faced unique challenges, including accessing affordable financing to ensure they did “not fall back on what they have achieved”. His country would, in this regard, be establishing with the United Nations systems new commitments towards Millennium “Plus” targets.

Because of Member State’s diversity in size and population, he continued, the “one-size-fits-all” approach to development had not worked. Even with the United Nations different development categories to ensure those most in need receive support, resources were still stretched. He urged that development categories not become a “means to punish those who succeed in development”. International development architecture had ensured reliable funding and provisions for middle-income small island development States, in particular in regards to climate change. Such States risked getting lost between categories, and he called for a system-wide review of how the various agencies and organs were actually supporting small island developing States.

He then turned to recent developments in his country, notably a restructuring of “old” debt through “new” foreign direct investment, mostly coming from Gulf States, Africa and Asia. A renewable energy project was also being undertaken with the support of the United Arab Emirates Government, which he said was an example of how a small island could access affordable financing to reduce dependence on fossil fuel. He pointed out that these South-South dynamics were often overlooked, while time was spent on ideological debates which, in his view, “further obscure the true objectives of development”.

Calling for the international community to “move beyond what we have already tried”, he spoke of the ongoing situation in Somalia and expressed his country’s solidarity with its people and the Transitional Federal Government. He observed that the situation in Somalia was hampering the conditions for development in the region, and that terrorism and piracy continued to spread. He also urged the strengthening of efforts by the international community to tackle transnational crimes that led to instability, and stated his country’s and his region’s determination to work with all partners towards this end. “We are all part of the United Nations because we believe that we must work together to achieve development,” he reminded the Assembly, and urged more innovative financing, as well as a strengthening of collaborative efforts in the process of moving forward together.