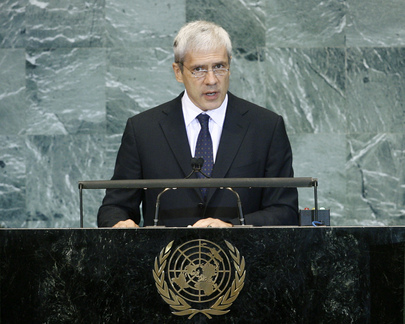 BORIS TADIĆ, President of Serbia, recalled the resolution adopted recently by the Assembly weeks ago that acknowledged the content of the advisory opinion of the International Court of Justice regarding the unilateral declaration of independence of Kosovo, which, he said, was fundamentally status-neutral with regard to the status of Kosovo.  The Assembly had welcomed the European Union’s readiness to facilitate a process of dialogue between the parties, and Serbia welcomed, and looked forward to, engaging in a process that would hopefully lead to a mutually acceptable compromise solution to the problem of Kosovo.  Serbia had always maintained that the attempt to secede unilaterally was a violation of the basic principles of the United Nations Charter, the Helsinki Final Act and Security Council resolution 1244 (1999).

He said a vast majority of Member States had refrained form recognizing Kosovo’s unilateral declaration and had continued to abide by Charter obligations to respect Serbia’s sovereignty and territorial integrity.  Consequently, Serbia’s position remained unchanged:  the unilateral declaration of independence of Kosovo would not be recognized by Serbia explicitly or implicitly.  He stressed that the World Court’s ruling had reaffirmed that Kosovo remained under United Nations interim administration and that Council resolution 1244 (1999) and the United Nations Constitutional Framework for Provisional Self-Government in Kosovo stayed in force and continued to apply.

Reaffirming Serbia’s readiness to abide by the resolution, he declared:  “We are now ready to talk and we will do so in good faith.”  As such, he called on Member States to engage fully in a spirit of their vote in the Assembly, stressing that dialogue required trust.  “Soon the two parties will be talking to each other for the first time in many years.  We must be patient and seek out those issues which allow confidence to be built on each side,” he stated, pointing out that there would be many issues to discuss and some of them would be complicated.  He cautioned that it would be harmful if there were attempts to alter what he termed “realities on the ground” while discussions got under way, as any such attempt to change realities through the use of force would bring an immediate end to the process of dialogue.

Turning his attention to organized crime in the region, he said that scourge was now a global industry and was the dark side of globalization as it attached itself to weak societies.  It also attached itself to political and religious extremists and attempted to buy and subvert democracies.  He considered organized crime in the Western Balkans to be the greatest challenge to his country and to the region as a whole.  As such crime had always been present in the Western Balkans, largely propped up by wars in the region, he was gravely concerned that it was developing capabilities – acquired from the globalization of crime and access to technology – at a much faster pace.

Criminals brought drugs, guns, human trafficking and corruption into societies and, in so doing, used the region to spread into Europe.  Warning that “this is a race against time,” he stated that the stark choice was that South-Eastern Europe would become either a valuable bridge between Europe and vital areas of the East or it would become the beachhead of organized crime trying to reach Europe.  He said leaders of the region had a common responsibility to eliminate that scourge on their societies, pledging that Serbia would spare no efforts in its quest to eradicate the threat.