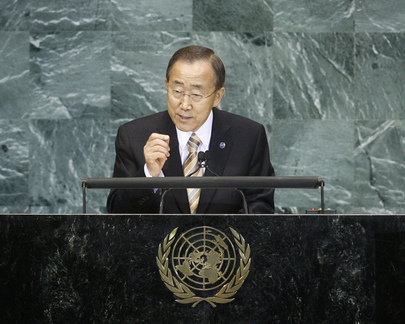 Opening the general debate, United Nations Secretary-General BAN KI-MOON recalled that the Organization was bound by sacred duties: to care for the welfare of others, to peacefully resolve conflicts and practise mutual respect. “Today, we are being tested,” he said, stressing that social inequalities were growing and people everywhere were living in fear of losing their jobs. Too many others were caught in conflict.

Amid such uncertainty, people naturally sought a moral compass, he said, and at the United Nations, “we find the proper path in community […] mutual responsibility for a destiny we share.” That was the soul of global governance, the theme of the Assembly’s sixty-fifth session. It was a collective stand […] against the forces that divide, which was why the United Nations remained the indispensable global institution for the twenty-first century. This was a season for pulling together, consolidating progress and delivering results.

Over the past three years, the Organization had embraced an ambitious agenda, he said, framed by three overarching themes: a more prosperous world, a cleaner, more sustainable world for our children and a safer world, free of nuclear weapons. Those were the great challenges of the era; “they are not dreams”, he said. “They are opportunities within our power to grasp.”

At the recent Millennium Development Goals Summit, 139 Heads of State and Government agreed on a mutually accountable partnership that would better the lives of billions of people within this generation. The challenge now was to deliver on that promise and draw on lessons learned: helping people help themselves, coupled with smart investing in education, decent work, health, smallholder agriculture, infrastructure and green energy. In that work, women must be placed at the fore and he welcomed the endorsement of the United Nations Global Strategy for Women and Children’s Health. “By empowering women, we empower societies,” he said.

Turning to climate change, he said that, while the road to a comprehensive, binding agreement would not be easy, progress had been made, and this year, it would be important to build on areas including financing for adaptation and mitigation, technology transfer and capacity-building. By 2050, the global population would grow by 50 per cent, and to keep climate change in check, greenhouse gas emissions must be cut by 50 per cent by that time.

On nuclear disarmament, there was also new momentum, he said, seen with a new Treaty on the Reduction and Limitation of Strategic Offensive Arms (START). The focus now was on finding a path to bring the Comprehensive Nuclear-Test-Ban Treaty into force and to realize agreements on fissile materials and securing nuclear facilities. Tomorrow, the United Nations would host a high-level meeting to reinvigorate the Disarmament Conference. The next few years would be crucial. “Will we advance our work on non-proliferation and disarmament, or will we slide back? It is up to us.”

Describing the United Nations’ work in the last year, he said the Organization had assisted Pakistan in coping with epic floods, as well as Haiti, where reconstruction work continued and where so many lives had been lost, including 101 United Nations staff. Work continued for peace and security in Somalia, Sudan, Niger and Gaza, he said, adding that, three years ago, in partnership with the African Union, the United Nations deployed the first peacekeeping force in Darfur. Tomorrow’s high-level meeting on Sudan would help chart a path to maintaining peace between the north and south of that country. In the Democratic Republic of the Congo, the United Nations had adapted its mission to changing circumstances.

Recalling the United Nations activities in Iraq, Guinea, Sierra Leone and Kyrgyzstan, he said that in Afghanistan, the Organization was carrying on despite difficult security and humanitarian conditions, while on the Korean peninsula, it had encouraged the Democratic People’s Republic of Korea to return to the Six-Party Talks. On Iran, the United Nations had urged constructive engagement with the global community and compliance with Security Council resolutions. In the Middle East, it was working with the Quartet to bring negotiations to a successful conclusion.

Describing efforts to build a stronger United Nations, a theme that had defined its work, he said reforms taken in recent years were bearing fruit, including with the New Horizons’ Initiative to streamline peacekeeping operations, which would create a more dynamic Organization. In coming weeks, he said, as delegates discussed the importance of issues facing humankind, they should remember that the world still looked to the United Nations for moral and political leadership.

“The great goals are within reach,” he said. “We can achieve them by looking forward, pulling together, uniting our strength as a community of nations, in the name of the larger good.”