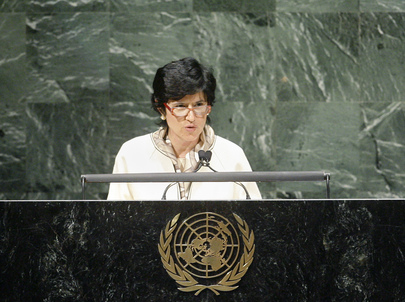 San Marino believed the Security Council should also be reformed into a more democratic, responsible, transparent and efficient body that had more balanced relations with the General Assembly and more effective cooperation with the Secretariat, she said.  Those objectives could only be achieved through permanent dialogue among States and increased flexibility of respective positions.  The General Assembly’s theme, the role of the United Nations in global governance, was a complex subject, because it concerned threats such as climate change, the economic crisis, food security and terrorism that increasingly affected peoples’ destinies.  The crises of the last few years showed it was necessary to adopt an integrated and comprehensive approach for global, coordinated action.  The United Nations had the duty lead global governance, not only on account of its deeply democratic nature, but also because it enabled an approach that harmonized the interests of the entire international community.

Last year, the Group of 20 (G-20) played an essential role in preventing a global economic depression by taking coordinated and timely action, but its decision making process should be more inclusive and transparent, so its decisions could be translated into effective action at a world level.  For the Group to complement the work of the United Nations, there needed to be mechanisms through which the interests, worries and aspirations of countries, especially developing ones, could be taken into account.  Over the last two years, she said, San Marino had adopted anti-money-laundering and terrorist financing laws in an intensified effort to make its banking and financial practices compliant with international standards.  Also, the 2 July adoption of A/RES/64/289 on United Nations system-wide coherence was a historic achievement for reform, with the fundamental element establishing United Nations Women.

She also underlined the importance of work by the international community and pressure by civil society to increase human rights protection, noting “we cannot forget that women and children are always the most vulnerable section of society in situations where rights and fundamental freedoms are violated.”  The international community should work efficiently to combat the trafficking in persons, and San Marino attached the utmost importance to the adoption last July of the resolution on the United Nations Global Plan of Action to Combat Trafficking in Persons, and guaranteed its support of the initiative.  The Millennium Development Goals brought slow, but uneven improvement in the fight against extreme poverty, and more structured commitment would be necessary to meet the Goals in 2015.  San Marino was satisfied with the General Assembly’s high-level meeting on the Goals, which renewed the commitment and responsibility of each country.