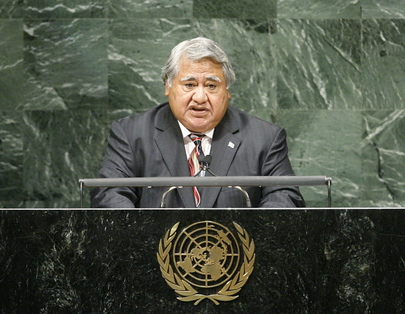 Tuilaepa Sailele Malielegaoi, Prime Minister of Samoa, stressed that the magnitude of today’s threats required holistic solutions taken through a multilateral approach.  Nations of the world needed to coordinate with each other as tackling current challenges was a shared responsibility.  A vibrant institution was required to meet those challenges, one which was equal to the task and could respond to the imperatives of our time.  “The United Nations provides the only viable framework and legitimate authority to act globally to address issues that transcend national borders,” he declared.  The Organization needed to pay heed to its ability to offer itself as a “safe place,” not just for its traditional stakeholders — Member States — but also for international organizations, the business community and civil society.

The United Nations, however, was not without its shortcomings and it was crucial that the Organization’s role be constantly refined and adapted to respond to the world’s needs.  Samoa had consistently supported a Security Council expansion in both permanent and non-permanent memberships.  Economic and political liberalization over the past two decades had changed the contemporary geopolitical realities and landscape, thus enlarging the 15-member body in both categories was “essential for true multilateralism and for the Council’s integrity and credibility”, he noted, adding that ongoing reform of the General Assembly was equally vital.

Climate change and its impacts held dire implications for global peace and security.  It threatened to intensify existing drivers of conflict in a way that could roll back development across many countries.  While a new climate change instrument was currently under negotiation, progress had been “painfully slow”, contradicting the gravity of the problem.  Vested national interests had taken precedence over concern for a global and just solution.  A privileged few — with fortunate geographies and resource endowments — may have felt that they could afford to wait out negotiations on a legally-binding climate change agreement.  Island nations at the frontline of climate change’s destructive impacts had no such luxury.

Any new climate change treaty, he said, would be ineffectual without full membership and participation of all United Nations Member States, especially those obligated to do so.  The much publicized “fast track” funding announced in Copenhagen to meet the most vulnerable countries’ adaptation needs had become a “best kept secret”.  Information on how much of the pledges had been honoured, disbursed and to whom had been scarce.  When available, such information was often vague and bereft of coordination.  In that regard, he called for the fast track resources to be made available without delay with clear, simplified guidelines to ensure that intended recipients could access assistance.

Continuing, he urged State parties to commit to reaching an agreement in Cancun founded on the Bali Action Plan.  “We cannot afford to leave Cancun empty-handed.  Concrete results must be achieved,” he said.  Turning to global security, he noted that terrorism was a mutual area of concern, which demanded a collective response.  On other matters, he said the United Nations should continue to prioritize the non-proliferation of weapons of mass destruction, as well as the risk of their acquisition by terrorists and other criminals.  Nuclear terrorism was of the most challenging threats to international peace and security.  Samoa believed that the only absolute guarantee against the use or threat of use of nuclear weapons was their “total elimination”.

In that light, his country welcomed the announcement that the United States was moving towards ratification of the Pacific region’s Nuclear Free Zone Treaty.  Furthermore, it welcomed the recent United States brokered initiative for direct negotiations between Israel and Palestine to advance the two-State solution.  He drew attention to the upcoming one year anniversary of a tsunami which had devastated his country, noting that stability had been re-established despite the heavy loss of life, injury and destruction of property.  It was through the generous support of development partners that Samoa’s reconstruction phase was progressing well.